With the assistance of the Enterprise crew, Admiral Kirk must stop an old nemesis, Khan Noonien Singh, from using the life-generating Genesis Device as the ultimate weapon. (from IMDb)

Three years after Star Trek was resurrected for the big screen, fans were gifted with one of the series' best entries, Star Trek II: The Wrath of Khan. Often heralded as the best in the Star Trek movie series, Khan revisits a storyline from the original TV series and serves as a sequel to that episode, "Space Seed." Here, the Enterprise crew accidentally run into old nemesis, Khan Noonien Singh, the superhuman whom they stranded on a planet to live out their days. However, a space catastrophe turned their planet into a wasteland, and now Khan, with what's left of his own crew, are out for vengeance. What started out as a peaceful mission for Admiral Kirk, turns into one of the deadliest and most costly in his lifetime. 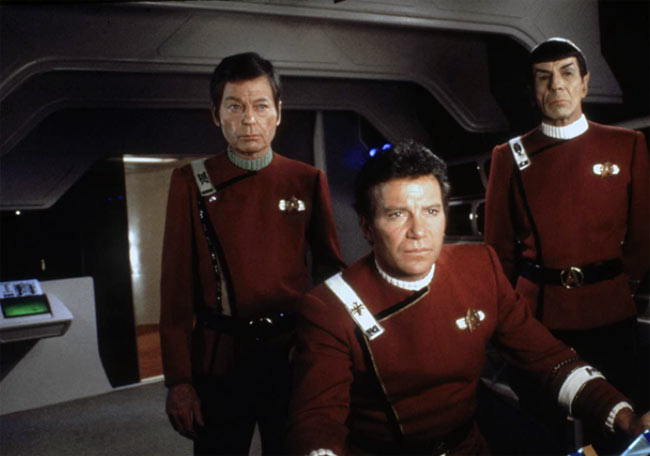 Star Trek II: The Wrath of Khan has since been released with a special "Director's Cut" version of the film, and while I've seen the theatrical version before, I decided to watch, for the first time, this Director's Cut. Since I can't say I'm all too familiar with the original cut, I didn't notice much different about this version. After I dug around a bit online, I found that the biggest differences are merely bits and pieces of dialog here and there. Perhaps the most notable is establishing an engineer rookie as Scotty's nephew, which makes his eventual demise all that more impactful. Choosing which version over the other is really up to the viewer, but I think this cut is probably just a tad more complete. 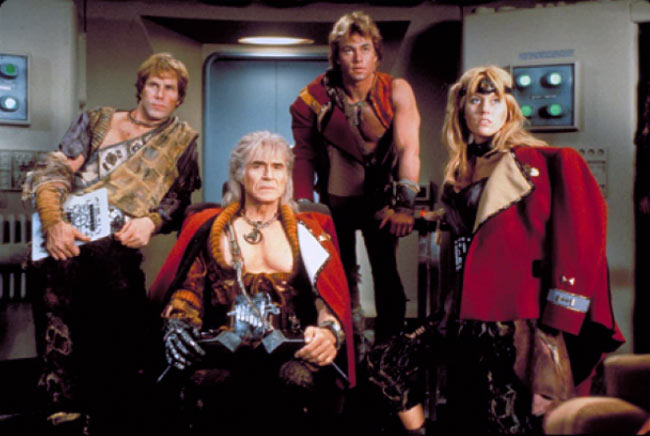 While Star Trek: The Motion Picture was disappointing on just about every level, Star Trek II: The Wrath of Khan really rights the ship. At times, one might feel like it's nothing extraordinary, but it's a bit of a slow burn. The story gives the original cast plenty of chances to shine and surprise, and that's what helps make The Wrath of Khan really stand out. While his physical appearance borders on the comical (that 80's hair; that chest-baring tunic), Ricardo Montalban's performance as Khan is perfectly vengeful. Much like 2013's reboot/remake Star Trek: Into Darkness reimagined this fateful confrontation, Kirk and his team is tested to their limits. And, it's truly heartbreaking when that certain beloved Trek character decides to make the ultimate sacrifice to save the ship and its crew. It punches just the right emotional spot and leaves its mark properly. Wrath of Khan really is Trek at the top of its game. 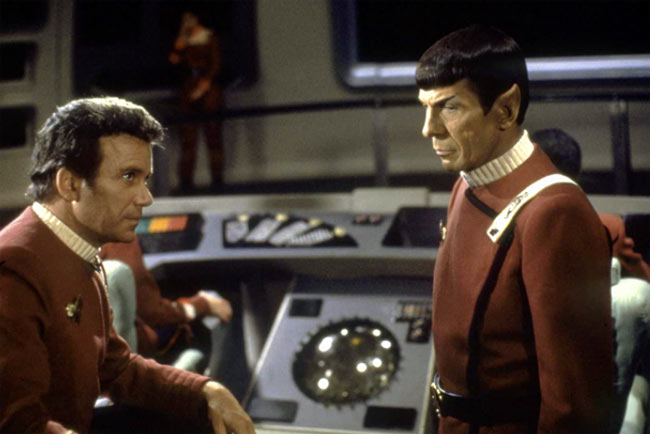 The content for Star Trek II: The Wrath of Khan is surprisingly violent and edgy - especially when compared to the first entry. There is a lot more blood and gruesome visuals, including the sight of spaceworms entering the ears of a couple of heroes and exiting an ear just as disturbingly. We also see several views of bloodied and burned victims, with one character's entire side of their face shown melted and covered in blood as they die. Language is also upped a bit, with the usual "h*ll" and "d*mn" being joined by a use of "g*dd*mn" and "S.O.B." It's a much darker and more violent storyline this time around. When the Enterprise crew go to investigate a science base in space, Bones accidentally walks into a pair of bloody hands. He looks up and sees the bloody face of a dead man. The scene then jumps to them finishing up cutting down scientists who were murdered and bloodied (with pools of blood on the floor) that Khan had strung up. It's rather intense for Star Trek. Lastly, the movie ends on an emotional note where a main character of the series (as if most don't already know) gives their life to save everyone else. It's a heavy sequence. All things considered, I think a PG-13 rating would be more fitting for this one. 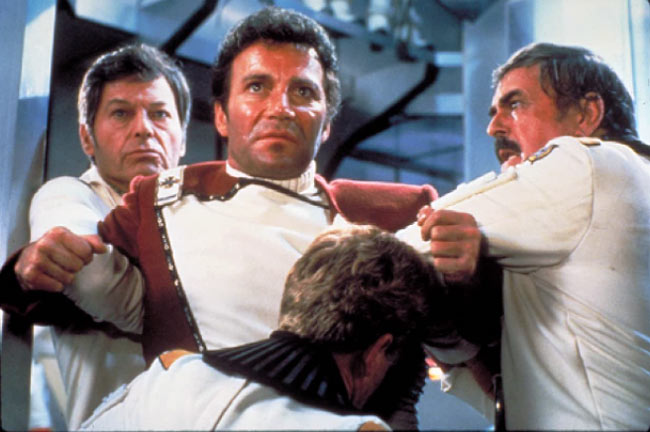 While the 4K UHD transfer wasn't super impressive for Star Trek: The Motion Picture, The Wrath of Khan definitely fares better. It's not jaw-droppingly impressive, but it definitely looks good. If you're a fan, I definitely recommend this new UHD transfer.

Along with the feature film on Blu-Ray and 4K UHD sets (which are two separate 4-disc collection cases inside a cardboard slip case, for a total of 8 discs across the four movies), are the following, mostly previously released extras for Star Trek II: The Wrath of Khan:

Alcohol/Drugs: Bones gives Kirk a bottle of Romulan ale and they have some and react to its strength.

Blood/Gore: Scotty holds a burned scarred body in his arms; Scotty had blood on his head; We see closeup of a burned bloody person as they die. He gets a smear of blood on Kirk's white jacket flap; As they investigate a space station, Bones accidentally runs into bloody hands hanging above him. He looks up and finds a dead man with blood all over his face. The next scene shows them cutting down dead bodies. Puddles of blood are on the floor under and around them; A man is dissolved by a phaser blast; A man dissolves himself with a phaser; A bloody worm crawls out of Chekov's ear (seen in close-up). Kirk burns it on the ground with a phaser; Khan has a bloody cut across his bare chest; During an attack, Khan removes debris covering a crewman. He has blood on his head and dies; One entire side of Khan's face and body (including one hand) is burned, scarred and pretty bloody; A person's skin is peely and discolored from radiation poisoning.

Violence: Explosions happen around the ship's bridge with main characters reacting by falling to the floor and playing dead. We find out it's all part of a test for a cadet; Khan clamps down on an alien worm and pulls larvae out of one of their backs. He then puts them in the helmets of two men and we see them crawl into their ears as they scream; A ship fires on the Enterprise, causing explosions inside and crew scrambling; Enterprise is hit again. We see explosions and fire on the bridge; Enterprise fire on the attacking ship and cause explosions inside; Scotty holds a burned scarred body in his arms; Sick bay is filled with burned victims; We see closeup of a burned bloody person as they die; As they investigate a space station, Bones accidentally runs into bloody hands hanging above him. He looks up and finds a dead man with blood all over his face. The next scene shows them cutting down dead bodies. Puddles of blood are on the floor under and around them; David jumps Kirk and they scuffle with Kirk evading his swings; A man is dissolved by a phaser blast; A man dissolves himself with a phaser; A bloody worm crawls out of Chekov's ear (seen in close-up). Kirk burns it on the ground with a phaser; Khan has a bloody cut across his bare chest; Khan grabs a crewman by his shirt and pushes him back in anger; Ships fire at each other and miss. They hit each other with explosions and fire in both ships. Khan removes debris covering a crewman. He has blood on his head and dies; They blow up parts of the Reliant with crew reacting to the destruction and others lying dead; One entire side of Khan's face and body (including one hand) is burned, scarred and pretty bloody; Spock knocks out a man with a Vulcan neck pinch; During an emotional scene, a crew member knowingly enters a radiation-filled room to fix a broken engine piece. We see them die later. Disclaimer: All reviews are based solely on the opinions of the reviewer. Most reviews are rated on how the reviewer enjoyed the film overall, not exclusively on content. However, if the content really affects the reviewer's opinion and experience of the film, it will definitely affect the reviewer's overall rating.