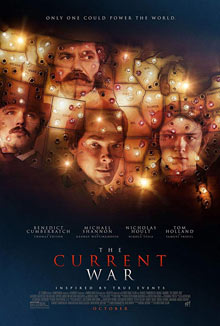 The dramatic story of the cutthroat race between electricity titans Thomas Edison and George Westinghouse to determine whose electrical system would power the modern world. (from IMDb) 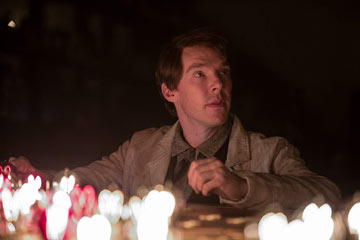 The long-delayed The Current War has finally seen the light of day as a "Director's Cut." The film was supposed to release 2 years ago, but the Harvey Weinstein scandal got it shelved, due to his company being the distributor for this movie. After re-edits and reshoots, and securing new distribution, it's finally here.

The Current War follows the conflict between inventors Thomas Edison, played by Benedict Cumberbatch, and George Westinghouse, played by Michael Shannon. After Edison invented the lightbulb, Westinghouse attempted to perfect it with an alternating current, and each one tries to convince towns and cities to adopt their method of electricity. The end result is a surprisingly dark rivalry between the two as they try to undermine the other in the process. 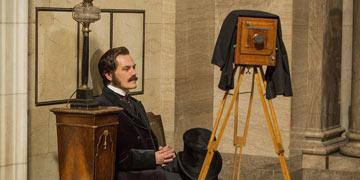 Cumberbatch and Shannon are solid in their performances, and it's a wonderfully cast film that is worth watching the film for alone. However, its a slow burn for sure, as, despite it being beautifully and artfully shot by director Alfonso Gomez-Rejon, The Current War is a slow moving film that has its moments but is certainly not for everyone. It's a bit reminiscent of The Prestige, which even involved Edison and Tesla, but isn't nearly as exciting or suspenseful and leans more heavily on the docu-drama style of storytelling.

The content for the film is relatively mild, but the subject matter surprisingly arises involving the use of electricity for the death penalty, and one scene shows a man covered in blood walking into a police precinct and confessing to murdering his wife. The ethics of the death penalty then become a big part of the plot. There is also some other heavy themes, like a main characters wife dying of a sudden illness and another character suddenly dying from an accident involving electricity. Finally, there is also some moderate profanity, including some uses of blasphemy, but it's mostly mild given the time period it's set in.

Overall, if you like dramas and are a fan of anyone in the cast, The Current War: Director's Cut is worth checking out. However, if solid acting and a great cast isn't enough for you, then you may want to just pass this one up.

Alcohol/Drugs: There is some miscellaneous drinking in the film, but nothing substantial.

Blood/Gore: A man, covered in blood, is seen walking down the street and then into a police precinct where he confesses to murdering his wife.

Violence: A woman collapses suddenly and we find out she's terminally ill; Edison throws a glass in anger; We see a machine spark and burst; After a test showing how dangerous electricity can be, we see a horse--the test subject--being carried away in a body bag; We briefly see a hanging with a person dropping through the floor on a noose; A man, covered in blood, is seen walking down the street and then into a police precinct where he confesses to murdering his wife; We find out that a man accidentally kills himself with electricity, but it happens off screen. We just see a flash of light through a window; Westinghouse recalls a memory of being a soldier and being held at gun point; We later see a continuation of the memory where Westinghouse shoots the man who held him at gunpoint; We see a man getting strapped into an electric chair, where he is put to death (off screen). Disclaimer: All reviews are based solely on the opinions of the reviewer. Most reviews are rated on how the reviewer enjoyed the film overall, not exclusively on content. However, if the content really affects the reviewer's opinion and experience of the film, it will definitely affect the reviewer's overall rating.