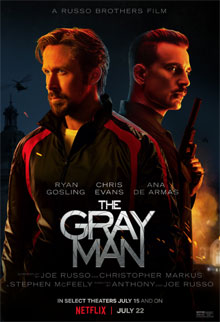 When the CIA's most skilled operative-whose true identity is known to none-accidentally uncovers dark agency secrets, a psychopathic former colleague puts a bounty on his head, setting off a global manhunt by international assassins. (from IMDb)

The Gray Man is the latest big blockbuster movie to skirt theaters and debut exclusively on NetFlix. The streaming giant found much success with 2021's Red Notice and seem poised for more with the latest directorial effort from The Russo Brothers -- the duo that brought us four excellent Marvel entries, including Avengers: Infinity War and Avengers: Endgame. This feature reunites the Russos with the star of all four of their Marvel films, Captain America himself, Chris Evans. This time, however, Evans isn't playing a freedom-fighting super soldier, but instead a sociopathic hitman who prides himself in getting the job done, no questions asked. 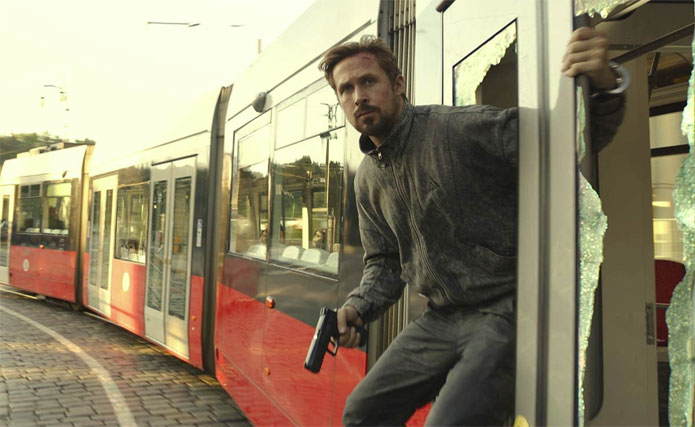 Ryan Gosling stars as the titular character, also only known as his code name, Six. Gosling's character is part of an elite covert ops group in the CIA that hired criminals and trained them to be ghosts, doing the dirty work of the agency. When Six finds out his latest assignment is actually an asset just like him, a target is put on his back as he attempts to find out what exactly is going on. What unfolds is part-Jason Bourne, part Mission: Impossible as this highly entertaining action film delivers on the thrills with a great cast. Ana de Armas returns to the action spy genre, after a very memorable (albeit criminally short) appearance in the most recent Bond film (No Time to Die), proving she's got what it takes to be a fierce little force to be reckoned with. The Russo's don't hold back on the destructive action, either, with lots of explosions, shootings, and chaos that possibly adds up to the sum of all of the mayhem in their four Marvel entries combined (I know; that's almost definitely an overstatement). Sure it asks the audience to suspend their disbelief, but it's no less a wild ride. 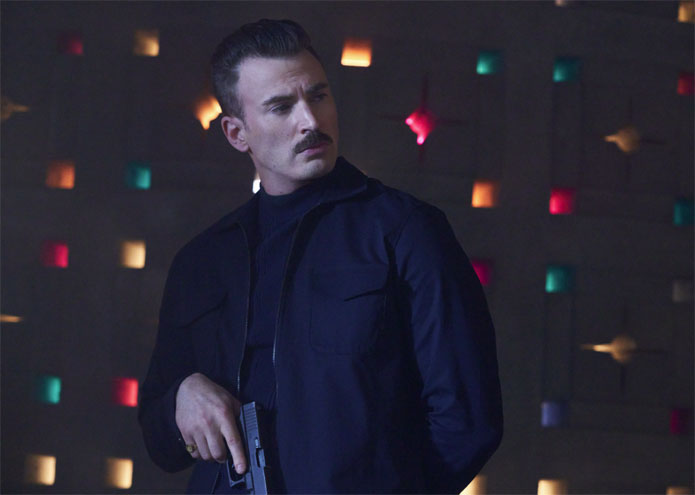 Gosling seems to excel at playing stoic characters (sometimes to a fault, like in First Man), and he does well as the lead in The Gray Man. I liked how the Russo's gave viewers a peek into Six's past and childhood to explain how he got to be how he is today. I feel like that's seldom something touched on in a film like this. It gives an added layer to the character of Six and helps you empathize with him more. Gosling also makes the incredible action stunts he does look effortless, and it only adds to the slick feel of the film. Composer Henry Jackman reunites with the Russo's after having turned in two memorable scores for the brothers on Captain America: Winter Soldier and Captain America: Civil War. At times, Jackman seems to borrow some from his Winter Soldier cues, but it all works really well in this setting. While the Marvel films often inject humor to lighten the heavier tones of their action movies (something that often polarizes fans), the Russo's hold back from that this time. Sure, Evans' Lloyd Hansen is over-the-top and fun to watch, but the humor is more of a "black comedic" kind than outright humorous. This isn't to say the movie takes itself too seriously either; the Russo's clearly have fun with the characters and the action set pieces, and it seeps through on screen.

The content of The Gray Man is a hard PG-13, with a great deal of very vicious violence. While the violence is seldom graphic - although it definitely is at times - there's lots of it, and it doesn't leave a whole lot up to the imagination. They could have easily gone all-out to make this an R-rated affair, but it definitely works as a slightly toned-down PG-13 outing. Still, it's brutally violent. Lots and lots of characters are gunned down, there's numerous stabbings and slicings with knives and other sharp objects, and there are a couple torture scenes that are likely to make the more squeamish nauseous. For instance, a character is tortured by their fingernails being pulled off with pliers. We don't see it in full graphic detail -- the camera angle obscures some of it -- but we hear the squishy sounds of them being pulled off and see the victim in pain. There's then a quick shot of a couple bloody nails lying on a table (it all was enough to turn my stomach some, but admittedly I'm more sensitive to graphic violence). Yes, it's something one could see in a TV show like 24, and literally in a scene from the third season of Lethal Weapon, but it's still pretty gruesome. Many characters have bloody wounds on their faces and hands, blood running down their arms, and some blood-soaked clothes after being shot. Probably the most shocking moment is a jump scene where we see a knife go through the back of someone's hand and it's focused on just long enough to see the blade pushing through. We then briefly see them pulling out the blade with blood covering their hand. It isn't shown in close-up, but it's still pretty rough. Other scenes involve people being shot at close range and killed, stabbings in the dark with sharp utensils or knives, and a particular sequence when Six fights multiple men with a scissor blade and we see him slash at their faces and stab their necks and bodies. We don't ever see the wounds - or any blood for that matter - and it's shown from behind, but it's still pretty gruesome to think about. Another scene shows a man missing fingers on his hand after being shot, and the finale is pretty violent and brutal as a couple guys fight to the death. Language isn't pervasive, but it's frequent enough with 1 incomplete "motherf---" from Lloyd and over a dozen uses of the "S" word and other colorful words. Although infrequent, there are a couple uses of Jesus' name in vain in addition. Lastly, there's no sexual content, surprisingly enough.

If there's anything, aside from the content, to be said against the film it would be that it goes a little over the top at times. Granted, that doesn't really bother me if the movie is overall pretty good, but I can see some viewers having a problem with it. Some characters seem to be able to take any possible hit and keep on ticking, and it's definitely pushing the believability. For a movie that takes itself pretty seriously, the Russo's have no problem taking the action to unbelievable heights. Still, it never stops being entertaining, and there isn't a single moment that seemed boring. To be honest, I would have enjoyed seeing this on the big screen (and would even still consider going to see it in the theater if it were to eventually get a theatrical release). That's the only downside to movies only ever getting at-home releases; it never feels as grand as a big screen movie does. And for a movie like this one, streaming it at home does it a disservice.

While it's certainly no masterpiece, The Gray Man is an excellent action film. The cast is solid, the score is good, and the Russo's prove they can still make entertaining movies. It does push its PG-13 rating, however, so I can't outright recommend the movie, so do keep the content below in mind if you decided to dial into NetFlix to watch it.

Sex/Nudity: Lloyd threatens that he'll find "any man or woman" Six has slept with; Dani shows a little cleavage in the shirt she wears in some scenes.

Alcohol/Drugs: People having drinks at a club; Lloyd is seen sipping alcohol from a glass.

Blood/Gore: Six has a deep nasty car on back of his arm; We see a little blood on a man's shirt after being shot when the mark uses him as a human shield; We see a close-up as Six stabs a man in the abdomen. The face of the victim is burned on one side and a little bloody with blood running down his nose; A man dies and we see his eyes open. We see blood on Six's hands and blood on the victim's shirt; We see blood above Six's eye and on the side of his head; We see blood in a sink as Six washes up; We see the flashback of a kid with a bloody burn mark on his wrist after his dad burned him with a cigarette lighter in the car; Inside a pit, a man has blood on his face and mouth and there is blood on the floor; We see some blood on a man's shirt after being shot multiple times casually by Lloyd; Lloyd uses a pair of pliers to pull off a man's fingernails. We see two nails covered in blood on a tabletop; We see blood trickling down Six's face above his eye; In a sudden and unexpected moment, we see a knife go through Six's hand. It's shown in full briefly as the blade is seen pushing through the back of his hand with plenty of blood. He then pulls it out with lots of blood on his hand; An assassin has some blood on his head after a fight; We see more blood on Six's face; Six lifts up his shirt and we see the bloody wound from the scissor stabbing (not a close-up). He pours disinfectant on it; We see blood on a man's shirt and bandaged hand after he's been shot; Dani has a lot of blood on her face after a fight; A man is shot in the hand, blowing off two of his fingers. We then briefly see his blood-covered hand with fingers missing; A man has blood on his face and hands. We then see his back has a hole in his shirt with a big bloody burn mark on it; Six has blood on his arm; A teenager has a burn mark on her cheek; A man has blood running down his face; Another man has blood running down his arm; A man is shot in the chest and there's lots of blood on their shirt; Six has a bloody cut on his arm; We see a bunch of bloody cuts on Dani's face.