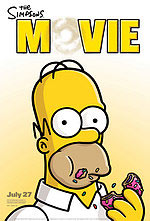 In the eagerly-awaited film based on the hit television series, Homer must save the world from a catastrophe he himself created. It all begins with Homer, his new pet pig, and a leaky silo full of droppings - a combination that triggers a disaster the likes of which Springfield has never experienced. As Marge is outraged by Homer's monumental blunder, a vengeful mob descends on the Simpson household. The family makes a narrow escape, but is soon divided by both location and conflict. (from MovieWeb.com)

It's amazing the kind of impact a show like The Simpsons has made on entertainment. The show debuted in 1989 and has become the longest-running comedy program in history, aside from the skit-based Saturday Night Live. With seventeen seasons under their belts, The Simpsons make it to the big screen for the first time ever with the aptly titled The Simpsons Movie. In truth, I've seldom watched the show, but I went into the film viewing it as an animated film and not as a diehard fan who has been waiting for something like this for decades. The final result is, of course, rather mixed.

The film starts off pretty strong as mostly a big screen version of an episode, but it isn't long before the movie is setting things up for a grander storyline and for things to be shown that couldn't be on TV. This of course includes the hyped scene where little ten-year-old Bart Simpson is dared by his dad Homer to skateboard through Springfield naked. Bart accepts the dare and we see his little yellow behind as he skates through, with all kinds of items blocking full-frontal nudity. And just as you expect a wall of shrubbery to block everything we really don't need to see, the only area of Bart that is not blocked out by the shrubs are his genitals, and we're given an extensive look at just his pre-teen privates. It's a distasteful shocker to anyone who hasn't read about it, and at the same time rather creepy considering Bart's age (heck, it's creepy at any age). But this extreme moment is really the worst that The Simpsons Movie gets. While shows like South Park try to cram as much vulgarity into a feature-length film just because they can, those behind The Simpsons know they have a greater (and probably more intelligent) audience, and know you don't always need to shock your viewers to get a laugh. Language is kept to the PG-13 kind, offering up a surprise "g*dd*mn," as well as a handful of other cuss words. To round out the content, we see Bart get drunk in a scene (although reprimanded by his mother), and all kinds of cartoony slapstick violence is included.

As a comedy, The Simpsons Movie contains some sharp wit to earn laughs whether you're a fan of the show or not. The film opens with the titular family watching a movie in the theater of a TV show they normally watch on the show and Homer stands up and reprimands his fellow audience members for paying to watch a movie of a television show they can watch at home for free. This leads to Homer pointing at us, the viewers of his own feature film, and calling us suckers. While the audience may not exactly have been duped, anyone who hasn't followed the show since its 1989 genesis will not get from it quite the same film the fans can. But I have to give props to the Simpson family, although still somewhat dysfunctional, for still having a loving bond. It's something you won't find on other more crass animated comedy shows like Family Guy. The filmmakers inject quite a bit of heart into The Simpsons Movie - maybe even to a fault. With much of the story being silly and random, it seems to come completely out of the blue when the moments turn a lot more serious and emotional. It feels forced more than once, but ultimately brings some bit of redemption to an otherwise frequently crude and irreverent comedy. The story touches on spirituality, given that a central family, the Flanders, who are neighbors to the Simpsons are devout Christians. They actually show the family's faith in a positive, albeit naive, way, while a church scene in the beginning pokes fun at prophesying and even turning to the Bible in troubled times (of course, they use Homer for this joke, and given his simple-mindedness, it's not done in an intentionally insulting way). And a quick sight gag that shows people panicking during a crisis running from a bar to a church while the church occupants simultaneously run to the bar gives a little extra to ponder in regards to what people turn to for solace in the midst of tragedy.

Regarding the film's story, in some respects it feels as if it tries too hard to encompass a little bit of everything. In nearly twenty years, an overwhelming amount of characters have been introduced, so I can understand the temptation to try to work a lot of them in for cameos. But it's the kind of "good idea on paper, bad idea in execution" that made the character-filled finale of Seinfeld so overblown and overdone. The Simpsons Movie is grandiose and large in scale, and it didn't really need to be. Giving a family like the Simpsons the job to save their town isn't exactly something you'd naturally see them do, but director David Silverman and crew still work it enough to keep it entertaining throughout (even if it seems to lose a bit of steam before the finale).

The Simpsons Movie has its moments of smart comedy and even a few heartwarming minutes, but this is certainly one movie all about a family that isn't for your family. Crude humor and some adult language and situations - although crossing the line only happens a few times - keep this from being a really enjoyable comedy that you can revisit again and again. Simpsons fans will most likely eat this up faster than Homer can inhale a doughnut, but those who aren't a fan of the show because of its edgier format most definitely will not enjoy this small screen to big screen venture.

Sex/Nudity: We see Bart skateboarding naked down the street, with his cartoony behind visible the whole time. In one sequence, a lot of foreground objects block his privates, but as he passes behind a large shrub, just his crotch area is visible and we see the small, non-detailed drawing of his 10-year-old's genitals. He then lands on a window and Ned Flanders is holding a French Fry which is placed at his crotch. This happens in the middle of his Grace prayer over his meal and thanks God for their "bountiful..." which is followed by his shocked reaction shouting "penis," to which his children reciting the prayer repeat; We see a few characters in their underwear; Homer tries to hint to Marge that they have alone time to sleep together while in a cabin and all kinds of wild animals come barging in to help them get ready (as if it's some kind of cutesy Disney film). Animals strip off Marge's dress and we see her in a sort of lingerie/nightgown and we see the animal's horrified reaction as they apparently start making love in front of them (we don't hear or see anything); Ralph sees Bart skate by naked and exclaims "I like men now!"; We see two male cops approach someone, and then begin kissing each other and close themselves in a hotel room; An eskimo woman with a large (clothed) chest directs Homer in the direction he needs to go by moving her bosom in the right direction (not done sensually)

Alcohol/Drugs: Characters are seen in bars and drinking several times during the film; During a panic scene, people run from a bar to a church and the people from the church run to the bar; Bart clearly gets drunk off of a bottle of alcohol. Later, Marge tells him she's proud of him for being sober for 24 hours; A character is briefly seen with some kind of bong

Blood/Gore: In a vision, Homer is pulled apart at the limbs, but it's not gory; Homer has some scratches on his face from a rake

Violence: LOTS of cartoon violence; A robot shoots itself in the head, a child beats up a bunch of bullies with a rod; Homer hits himself in the eye with a hammer; Homer chokes Bart on several occasions; A character is pressed/pinned under the rim of a large dome; A character is possibly impaled by a large piece of glass as we see their body and a large shard of glass sticking out of a hole in the ground; A woodsaw is thrown at Homer; A pitchfork mob scrape at Homer's face as he's stuck in the ground; Homer is mauled by a pack of dogs; Homer is hit by a crane he is in and smashed between a boulder and a rock, among other things; and lots of other cartoon-styled violence Disclaimer: All reviews are based solely on the opinions of the reviewer. Most reviews are rated on how the reviewer enjoyed the film overall, not exclusively on content. However, if the content really affects the reviewer's opinion and experience of the film, it will definitely affect the reviewer's overall rating.