Transformers: Revenge Of The Fallen

Decepticon forces return to Earth on a mission to take Sam Witwicky prisoner, after the young hero learns the truth about the ancient origins of the Transformers. Joining the mission to protect humankind is Optimus Prime, who forms an alliance with international armies for a second epic battle. (from MovieWeb.com)

In 2007, director Michael Bay defied naysayers by bringing the popular cartoon and toy line Transformers to the big screen in live action form. With incredibly lifelike animated robots (thanks to ILM), Transformers was one of the standout films of that year. Due to its massive success, the franchise spawned a sequel released this summer, intriguingly titled Transformers: Revenge of the Fallen.

As Bay is widely known for his wildly directed elaborate action movies aimed at the little boy that dwells inside every adult male, the director seldom holds back from inserting all kinds of juvenile humor and crude (and sexual) content in his movies. The first Transformers movie was no exception as Bay included just enough "adult" content to make the movie inappropriate for children. Sadly, Revenge of the Fallen is no different, and Bay even ups the crude content ante, making it even more non-family friendly than its predecessor. 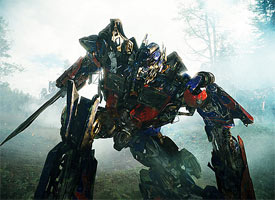 With Revenge, Bay adopts the philosophy that bigger is somehow better - something proven horribly wrong with sequels like The Mummy Returns and Spider-Man 3. While Revenge has its highlights and the look and feel of the original film, Bay pumps everything up to the next level, for better and worse. While the robots were kept to a manageable few in the first film, Revenge boasts over 40 robots, and due to their realistic design, it's often impossible to keep up with who is who. There's an incredible amount of additional action this time around too, including much more destruction (almost overwhelming), but Bay learned to pull back the camera this time to make the scenes easier to follow (even slowing it down in key moments to see the action).

But it seems that, for every exciting and fun moment in Revenge, there is at least one crude or awkward moment to match it. There is a marijuana gag where, while helping Sam move into college, his mother buys some brownies that she naively was unaware had weed baked into them, and we see her acting silly and crazy while high (and she tells a group of girls she was in the house when she heard her son lose his virginity... Really?! We needed that in this movie??). Besides that, a girl forces herself on Sam twice, the first time she straddles him on a chair and asks him to sleep with her and in another scene, forces him on a bed and climbs on top of him (they kiss some although he's resistant and we see her small underwear when the camera focuses on her short dress), but it doesn't go any further. Other crude and inappropriate remarks are made throughout the movie, we see girls walking in just towels in a dorm, some girls dancing seductively at a college party, and a running gag about two dogs humping and a little robot that humps Mikaela's leg in one scene. Lastly, we see a strangely close-up camera angle as Agent Simmons tears off his pants (while changing) to reveal a thong underneath. I'm not sure what goes through Bay's mind when he deliberately films this stuff for such a movie. It's a real shame too, because it's an otherwise fun popcorn action flick. But on top of all that, the profanity is about as bad as it was the first time around - except for the addition of one use of the "f" word, with even some of the robots (especially the twins and Wheelie) frequently using the "a" word as well as other colorful phrases. The violence, although intense, is seldom bloody at all, with the most being some bloody marks on a victim's face and neck. There's also a creepy moment where a robotic bug-like probe (think The Matrix) goes into a person's mouth and pokes out their nose.

So what is good about Revenge of the Fallen? As someone who grew up as a fan of the cartoon show and the toys, it's still fun to see the robots being realized in gigantic, realistic form. While Bay treats even the human characters like caricatures of people, in a way it actually fits the realm that these robots exist within. The Autobot leader, Optimus Prime, was a childhood hero, so it's still awesome anytime he graces the big screen (and having original voice artist, Peter Cullen, voicing him seals the deal). Also, the animation and effects and fantastic (although not quite as good as the first film). Back in 1993, Spielberg wowed audiences with realistic looking CGI dinosaurs and some of the magic was missing with its 1997 follow-up, The Lost World. It definitely had the same feel with Transformers 2, unfortunately. A little of the magic had worn off (especially as Bay dulls the viewer's senses with the relentless onslaught of action throughout the film), but opening skirmish in Shanghai (which was mostly filmed here in Bethlehem, PA actually) stands out as one of the more engaging moments of Revenge.

The story for the sequel is a bit complicated and even convoluted, with silliness weakening it at times. The love story between Sam and Mikaela feels much too contrived (I mean, really... They've dated 2 years and have stuck together but have never told each other they loved each other? Fail.). It was great to see some characters return and for some to get more screen time, but there was often too much going on to really give any characters besides the major few anything really substantial to do. Instead of focusing on old favorites like Ironhide, Ratchet, or even the military guys, we're introduced to "the twins" which are often goofy and irritating, as well as Wheelie who is foul-mouthed and obnoxious. For a movie not geared towards kids, why focus on characters that kids would otherwise love? It doesn't really make sense. Also, Bay once again reintroduces and dismisses characters too quickly and without explanation (didn't Bonecrusher get decapitated by Prime in the first one? And where did Wheelie go at the end?). Even with an almost 2 and a half hour running time, some of Michael Bay's direction and storytelling seems incomplete or unnecessarily flawed.

I wanted to love this movie, but Bay's lust for excess and crude content almost completely suffocates this long anticipated summer blockbuster sequel. Kids should skip this entirely while those who rather not have to endure the more vulgar material sprinkled through this action-heavy feature will also want to pass.

Sex/Nudity: Quite a bit, especially implied jokes and such. We see Sam's dog Mojo humping the other family dog at least twice. Sam's Dad remarks that Sam will be seeing that in college too. He also encourages Sam to experience other girls than Mikaela, but Sam insists he's a one woman guy. Sam's Dad slaps his wife's butt as she goes up the stairs and she makes a sound like she enjoyed it; In Sam's dorm, we see a poster multiple times in the background that shows a topless woman with her hair covering her breasts; Mikaela often shows cleavage. At one point we see her straddling a motorcycle in tiny shorts as she spray paints the image of a small naked woman on a bike; While high (accidentally), it sounds like Sam's mom tells a group of college girls that she could hear when Sam had sex in the house for the first time ("lost his cherry") because he didn't know she was home; While on the phone with Mikaela, Sam comments on having souvenirs from "that night that we won't mention right now" (or something like that) and mentions candles and such; Leo makes comments about trying to get hot girls at school, with his eye set on Alice. At one point, we see several girls walk by Sam and Leo while wearing just towels; At a party, we see a lot of people dancing (it's shown seductively). At one point, Alice forces herself on Sam, straddling him in a chair (like for a lap dance) and says she wants him to pretend she's his girlfriend for the night. Sam escapes, however. She then forces herself into his car, but Bumblebee plays songs about cheating and such and eventually forces her out of the car; Alice comes on to Sam again in his room and pushes him down on the bed. We then see her panties under her short dress as a robotic tail starts to peek out from under her dress. She kisses him and Mikaela walks in as he is kissing Alice. She asks if that's his girlfriend and Mikaela responds for him "ex" and walks out. Alice then starts to strangle Sam with a robotic tongue that extends out. Later, Sam tries to downplay what Mikaela saw by saying Alice's kisses tasted like diesel fuel (etc...) and made some kind of reference to it being like he was humped by an ox or something; We see two wrecking balls hanging down from Devastator's crotch area and Simmons remarks that he is under the robot's scrotum; After falling, Mikaela lands on Leo and we see her laying on his crotch area. He then says he's in a lot of pain because she crushed his balls; Agent Simmons rips his pants off (to change) and we see a close-up of his butt cheeks in a thong and then he turns around and we see the front (played for laughs); We see a small robot humping Mikaela's leg; and probably some other sexual dialog

Alcohol/Drugs: Sam's mom gets brownies at a bake sale at college that have weed baked into them, not realizing it. She then acts high and crazy for awhile. Sam's Dad makes a comment about them having reefer in them; There's drinking at a party

Blood/Gore: We see some bloody scrapes on Sam's face and neck; A person's face disintegrates into a mechanical robot; A small bug-like robot probe goes into a person's mouth, sticks out their nose and mouth before crawling out; We partially see Sam throwing up briefly

Violence: Lots and lots and lots of action violence -- robots fighting robots, being dismembered, killed and destroyed. Whole buildings and locations demolished during such fights, etc... Disclaimer: All reviews are based solely on the opinions of the reviewer. Most reviews are rated on how the reviewer enjoyed the film overall, not exclusively on content. However, if the content really affects the reviewer's opinion and experience of the film, it will definitely affect the reviewer's overall rating.