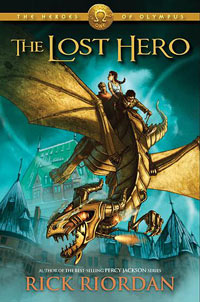 Undoubtedly, when Percy Jackson fans discovered that Rick Riordan, the author of the series, was putting out another five-book cycle with our beloved Son of Poseidon, they danced for joy and paraded about the streets in celebration. Had I not jumped on the Heroes of Olympus boat so late, I would have as well. Indeed, after having fallen in love with the first Percy Jackson series, I myself was quite ecstatic at the thought of returning to Camp Half-Blood and my favorite characters. With the (unfortunately) last book in this newest series hitting the shelves this fall, I thought I would hop to it and devour the four that are already out before the last one comes. So far, I have not been disappointed. Rick Riordan knows what he's doing with Greek and Roman mythology, and he delivers each adventure more strongly than the last.

The first book in the Heroes of Olympus series is The Lost Hero. Riordan opens our new adventure only a couple of months after the ending of The Last Olympian, the fifth book in the first Percy Jackson series. Hardcore fans will notice the elements about the mystery at the opening and start piecing the puzzle together themselves, but they'll hardly suspect what Riordan throws at us by the time we figure out what exactly is going on. The story begins on a school bus and introduces us right away to our three heroes: Jason, Piper, and Leo. The chapter is told from Jason's perspective, and we know right away something is wrong. Leo and Piper and everyone on the bus act like they know exactly who Jason is, but he himself has zero clue where he is, how he got there, or why everyone's insistent that he's been with them since the start of term. When the group of students is attacked by a monster, Jason manages to save the day with powers he didn't know he had, and the adventure is launched from there.

He, Piper, and Leo discover that they're what are known as demigods -- children who are half-mortal, half-god -- and one of Riordan's well-known heroines, Annabeth Chase, takes them to Camp Half-Blood, a safe place for demigods to train and attend summer camp or school breaks without worrying about monsters attacking them. When it's discovered that the goddess Hera is trapped somewhere on the West Coast, Jason, Piper, and Leo are chosen to set out on the quest to save her. Only, Jason knows Hera by a different name and still can't remember where he's from, and if he doesn't figure out why, the entire quest could go up in smoke and put all his friends in mortal danger.

Having read the first Percy Jackson series, I was slightly annoyed that Percy himself doesn't make an appearance in the first book. However, I completely understand why, what with him being missing and all. That does make for a little bit of difficulty. What I can say is that throughout The Lost Hero, Rick Riordan maintains his faithfulness to the spirit of his well-formed world-within-a-world dynamic and keeps readers on the edge the entire time. During the first series, I wondered why there was so much Greek mythology he hadn't touched. I was in no way disappointed in reading The Lost Hero, as Riordan incorporates so much new mythology, the seamlessness of his writing is liable to make experienced novelists sit up and take note, despite his being a veteran himself. The world of our heroes expands and becomes that much bigger, which is absolutely excellent and gives a greater sense of peril in every dangerous situation. Even though I knew our heroes would make it out alive, I had moments where I didn't realize I had held my breath until the trouble passed.

Speaking of heroes, the characterization in the novel develops more in some places than in others. Leo is one of the best out our new trio. His backstory is both tragic and mysterious, and the more I got to know him, the more I liked him. By the end of the novel, his growth is readily apparent and ultimately well-earned, not to mention well-written. Jason does eventually get his memories back, but the process feels as if it takes forever. He does experience some growth and adds a new element to the story; his personality and Percy's contrast sharply. As a reader, I'm incredibly thankful for this, as I personally dislike cardboard cutouts for heroes. Our third hero, Piper, has a little development herself in the raging internal conflict she has at every moment. I only wish Riordan had cut short some of this and stopped spinning us around in her internal dialogue's circles. As far as side characters go, Riordan is master at handing us someone, developing them, and then moving on with a full impression of that character remaining in our minds.

The biggest problem of this first book lay in the excessive dialogue in some scenes. For instance, when our trio meet up with King Midas or Medea, the villains monologue for a rather egregious amount of time, leaving me wondering why they didn't just finish off our demigods then and there. In the first series, whenever moments became this heavy, we had Percy to lighten up the scene with his natural quirky humor. With him being absent in The Lost Hero, that element was not there. Was there humor? Yes. But I sorely missed the Son of Poseidon.

Riordan adds a new element of Roman mythology and history to his world as the novel progresses. The contrast between the Greek and Roman happenings is incredibly cool and works perfectly for the disaster our demigods face as a whole: the Earth goddess, Gaea, is awakening and moving her sons, the giants, to destroy the demigods and the world as a whole, to take revenge on the gods and tear down Olympus. In order for Gaea to be stopped, the Greek demigods and Roman demigods will have to settle ancient bad blood and decide to work together. This novel's story closes itself out nicely, but the questions we're left with leave us begging for more: Will the demigods choose to cooperate? Why did Jason get taken from his camp? And where's Percy Jackson?

As far as content goes, this is a very tame and kid-friendly book. There's no alcohol or drugs; there are potions mentioned in Medea's department store, but nothing to intoxicate or inebriate. Profanity is limited to 8 or 9 "G*d" and 2 "cr*p." The only sensuality is fifteen-year-old Leo referring to some girls as "hot," Piper and Jason holding hands, the same two hugging for warmth and comfort in a dangerously cold and snowy situation, and one mention of them kissing in the past. Seeing how this is an adventure novel, there is plenty of swordplay and violence such as: explosions, brawls, duels, monsters exploding into dust, lightning strikes, golden monster blood (ichor) leaking out once in a while, and perilous situations where our heroes could easily kick the bucket. Nothing is gratuitous or gory or glorified.

If you are uncomfortable with Greek and Roman mythology, then I would recommend staying away from these books. However, if you're fine with the myths and have no problem letting your children read Riordan's work, I couldn't recommend them more. He never bashes on Christianity, never calls out that Zeus as the "ultimate being" or whatever, and always keeps the gods' status to that of a myth-come-to-life; gods state several times throughout both series that "even gods can be killed". Riordan is a master at his craft, and the development from one series to the next only proves how researched and respectful he is a novelist. Heroes of Olympus is shaping up to be one of the best middle-grade series of the decade. I'm only sad it has to end this October.