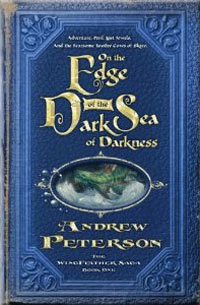 Andrew Peterson
On the Edge of the Dark Sea of Darkness

Where does Andrew Peterson find the time to do all that he does? Between writing and releasing albums (his latest, Light For The Lost Boy, was #5 On JFH's top 10 list for 2012), touring and holding epic Christmas shows, he has found the time in his day to write a series of fantasy books for children, based loosely on his own family life.

There is a great tradition, particularly in children's literature, to base stories on real life children who are in the life of the author. A.A. Milne wrote Winnie The Pooh for his son Christopher Robin, based on stories he would tell at bedtime when his son was surrounded by his stuffed bears, pigs, tigers and owls. J.M. Barry wrote Peter Pan for three children in his life that he made friends with at a local park. Even C.S. Lewis based his characters in The Lion, the Witch and the Wardrobe on children staying in his home during the bombing of London during World War II.

The first book of Peterson's Windfeather Saga fits in comfortably with those books mentioned above, and shows evidence that Peterson is familiar with the canon of children's literature, both classic and modern. (The Harry Potter comparisons came in early and often in the reading of this book, particularly in the humor department.)

Set in the mythical land of Aerwiar (so named because when the first man woke up on the first day after creation, he stated simply, "well here we are"); where the Igby children--Janner, Tink and Leeli--live in their simple cottage with their wise grandfather Podo and beautiful mother Nia. Peterson wisely starts the action off with a chilling first chapter, describing a black carriage that roams about the country on certain nights gathering children for nefarious reasons. A particularly creepy children's rhyme titled "The Carriage Comes, The Carriage Black," serves as a great bit of foreshadowing for the haunted, enemy-occupied country the Igby family finds themselves living in.

This spooky first chapter helps the reader to cut through all the Dr. Seuss-like language that Peterson chooses to employ in describing the land, history and features of Aerwiar. Indeed, if there were a major critique of On the Edge of the Dark Sea of Darkness, it would be that at times the language gets a bit too sugary and overbearing, bordering on silly to the extreme. Creatures like "thwaps," "blarps," "toothy cows" and foods like "totatoes" could cause certain kinds of existential language headaches in readers. In the beginning passages of the book, when Peterson is perusing the history of the land, talking about characters named things like "Gnag The Nameless" and the race of the "Skrees," and the first man "Dwayne," the candy-like nature of it all might easily persuade the reader to put the book down and go brush their teeth.

Thankfully, Peterson switches into high gear towards the middle of the book, and as mysteries are revealed and subplots start to collide, Peterson comes into his own as a novelist. The second half of On the Edge of the Dark Sea of Darkness proves to be as much of a page-turner as any Harry Potter or Hunger Games novel of recent years.

When mentioning those two blockbuster series, it's worth it to spend a minute talking about the spiritual dimensions of books aimed at children readers. And not simply in the rehashed arguments about magic and violence (though any parent worth their salt should indeed consider those elements), but in the role of family. In much of children's literature, adults, and parents in particular, are often presented as either completely absent or criminally stupid or cruel. This tactic has been used by writers as far back as Charles Dickens and Oliver Twist, all the way to the Harry Potter books. Writers frequently try to get the child reader on their side immediately by stating the age-old maxim that "adults never understand me or what is happening in my world."

This may be true to an extent, but it's refreshing in Peterson's books that the family is a collective unit experiencing the adventure and peril together. There is no perfection here, and secrets are kept from each other. But there is a collective "we" in the story that stands apart from the usual fare of the genre.

This emphasis on family, and the genuine work that it takes to love one another, coupled with first rate action and plot twists (particularly in the book's last third) make On the Edge of The Dark Sea of Darkness a compelling read for children and adults alike. Peterson is currently writing the fourth and final book in the collection, and new readers are blessed to be able to start off with a fine beginning to the series.