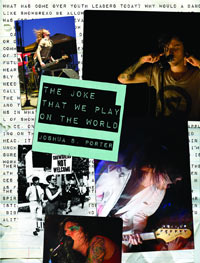 Joshua S. Porter
The Joke That We Play On The World

The strange entity that is the band Showbread has existed in some form since the year 1997. Theirs is a story that is long and filled with lots of trials, hijinks and lineup changes. Their long-running lead vocalist, Josh Dies, has written a couple novels in the past few years (The Spinal Cord Perception and Nevada), and one children's book (The Insect) under his real name, Joshua S. Porter.

Before taking the time to work on the sequel to Nevada - the soon-to-come An Edict of Worms - Porter wanted to work on a book about the band's history. His 2011 band autobiography is called The Joke That We Play On The World, and is full of interesting facts about the band - from the band's seemingly out-of-nowhere conception, the bands they played with and met that shaped their future, their decision to move from Tooth & Nail Records to Come&Live! Records, and lots more. It's also filled with funny stories about the bizarre games they play and their travels, as well as bits and pieces of theology and faith statements.

Porter appropriately dedicates the vast majority of the book to the band's history, but he also incorporates some personal autobiographical moments, as well. He talks about meeting the girl who would become his wife, Abi, his struggles with school and finding a job he cared about, and even some short struggles with his belief in Jesus. In addition to band history and personal history, Porter makes sure to dedicate a chapter (be it a long or short one) to each member of the band, past or present (titling each of these chapters after the name of the member in question). These band member chapters show up at seemingly random points of the book. In fact, several stories seem to be this way too, with stories from their younger years showing up later in the book once or twice. After reading a chapter called "Hundreds of TV Screens," it gave a little more insight as to why the book had been written that way, as in that chapter, Porter talks about the way his mind works (almost sort of an Attention Deficit Disorder-riddled mind, though Porter is quick to dismiss any such notion).

The Joke That We Play On The World is a great read. There are times when I got sucked in and couldn't put the book down. It's possible the only ones who will really find themselves truly caring about what's going on are Showbread fans, but it's a good and fun read even for those who just enjoy reading. Porter recalls a lot of information about the band; some of it not even relevant to the story, but always entertaining. A few times, he used other peoples' writings to tell the story. One section used a scathing concert review from a legalistic Christian publication. It fit well, as Porter talked about some Christians' reactions to the music and themes found on their Tooth & Nail debut, No Sir, Nihilism Is Not Practical. He also used a positive article later on in the book. In addition, he even used two interviews to lead into a couple different sections. One was from 2009 to talk about The Fear of God and one from 2008 to talk about Anorexia / Nervosa (taken with ecstatic permission from this very website).

There was a bit I was looking forward to reading about that Porter never mentioned, such as meeting Reese Roper and how Showbread got him to sing on Nihilism and Nervosa. I also wondered about the other guest vocalists on Nervosa (Family Force 5 frontman Soul Glow Activatur and Squad 5-O singer Jeff Fortson). But all in all, it's a great history lesson about one of Christian music's most controversial ministry-focused bands.