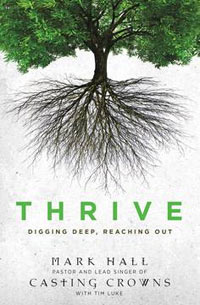 Reviewing books here at JFH has exposed me to the largest amount of Christian nonfiction I've yet to pick up since attending online courses at a Bible college. I have nothing against Christian nonfiction; being a Believer myself, I frequently scan this genre's section whenever I have the chance to see what's on the market nowadays. The only problem I have is with authors who think they know what they're talking about and end up leading people astray. Don't be alarmed. Thrive: Digging Deep, Reaching Out by Mark Hall was in no way one of those books, hence the reason I chose to review it. In a manner of speaking, Hall swings the opposite direction here: his ideas are well-meaning, but the manuscript reaches little depth until chapter 28, leaving us one chapter plus the conclusion to really dig deep into what he's trying to say.

Hall's writing begins with a sort of precursor as to what we're going to be getting in this book. He sets us up in the first chapter by usual nonfiction standards: you've picked up this book because X, now I'm going to answer your questions with Y and Z. Chapter two serves us the illustration of a tree in Geneva, Alabama called The Tree-a massive oak that sprawls into a river from the bank on which it settled hundreds and hundreds of years ago. Both the root system and branches are massive and are the inspiration for the book's cover, wherein the symbolism lay in us reaching out to others (the branches) while having a solid foundation in God (the roots). The spiritual logic behind this, in essence, is sound. However, this is where the connectedness of Hall's thoughts comes to an end.

Each chapter is quite short, and the logic within these chapters rarely connects to the Point to Remember at the end. For instance, chapter five was an illustration about an eagle whose egg rolls into a chicken pen, and when the eaglet hatches, it grows up thinking it's a chicken. When a real eagle comes about, the eaglet wishes it could be like that soaring eagle in the sky. The Point to Remember at the end of all of this was that God has a preset plan for our lives and our obedience to Him should be our response. The logic here does not connect. Notwithstanding the fact that this chapter could have been seamlessly combined with chapter four and made into a logical whole, the Point to Remember in no way states 1) whether our obedience will lead us to the path that God has for us, or 2) whether the eaglet could have been an eagle and discovered his identity if he'd just obeyed his natural instinct, because that portion of the illustration never even made it in. The book suffers this disconnection throughout, and the jar from one log jam to another has a drastic effect on readability.

I had issues with certain ideas in Thrive as well. Areas popped up now and again that flirted on the border of Prosperity Gospel. Until chapter twenty-eight, we were forced to tread water and search for deeper meaning, deeper roots, and a less vague sense of what was trying to be said. When "religious rules" were mentioned in chapter ten, the train of logic I was on came to a crashing halt. All this time, the book had been talking about thriving in the freedom of Jesus, and then we come about to rules and religion? The two don't mix, nor should they ever.

Now, I can in no way review this book in good conscience without making a very bold proclamation: I'm looking at this entire work by Mark Hall--lead singer of Casting Crowns--as a book by a writer. Let me restate: A nonfiction Christian book by a writer, not a musician, nor a pastor, nor anything else. The quality suffers, and I doubt Mark Hall is to blame, for behind every good writer is a great editor, and granted, writers always have the last say in this field. As a writer, with nine years of experience myself, though, I recognize poor editing when I see it. Mark Hall has admitted to having pretty intense ADD (Attention Deficit Disorder), and I can feel for him because I have ADHD (add Hyperactivity, that's it). This editor needed to take the time to point every single thing out to Hall in order for this book to Thrive. The writing aspired to be great; somewhere in the revisions process, that aspiration was dampened, and editing must bear that mantle.

Overall, Thrive: Digging Deep, Reaching Out did its best to bring across the message it was trying to preach to us. As Mark Hall's fourth venture into book-writing, the trend of logical connection should be expected to stick. If he plans to write another book of some sort, I would advise him to either look more seriously during the revisions process or go over every single chapter draft with outside eyes besides his editor. Books claiming to carry heavy messages of learning how to thrive should deliver, or change the synopsis readers scan before deciding to buy said book, not leave them wondering where the promised message is until chapter twenty-eight. Thrive is a finished copy. I pray Hall's next nonfiction venture connects a few more of its own dots than this one ended up doing.