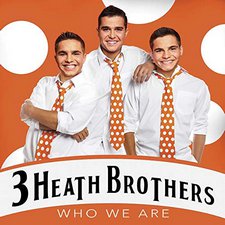 3 Heath Brothers
Who We Are


When first listening to brothers Nicholas, Clayton and Christian Heath, you're struck by how tight their harmonies are--then you realize they're still in their teens! Like sister rock trio BarlowGirl in 2004, gospel trio 3 Heath Brothers show just how polished and mature such a young group can be.

Who We Are begins with the uplifting "Dream Small," a song about how God often uses the people behind the scenes, doing ordinary things, to make a difference for His kingdom. The directness of the lyrics and the overall bounciness of the song are a little on the cheesy side, but that's not a bad thing in this case. The on-the-nose approach works well with the simple but true message.

The guys start to hit their stride on the next track, "This is Who I Am," which really shows what vocal powerhouses they are as they sing about our identity in Christ. Fans of early '90s Michael W. Smith could feel nostalgic by how this power ballad starts out soft and builds to a triumphant finish. Even the big snare sound gives it that vintage feel, though none of this is overdone, so it's not distracting. The instrumentation emphasizes their harmonies instead of overshadowing them.

But as impressive as that track is, the highlight of Who We Are is the brothers' acapella version of "It is Well." If the old hymn's backstory doesn't already move you, then the explosive harmonies definitely will. Many trained singers can belt it out like nobody's business, but the passion these guys bring is what separates them from most Christian radio fare.

Another standout is "Smell of Smoke," a song that compares the story of Shadrach, Meshach and Abednego to our own trials. It seems like too many recent songs skip over the Bible story part and go straight to the application (e.g. "You can defeat your 'giants' with God's help"), but "Smell of Smoke" tells the story first. This may seem like a simple, even insignificant detail, but starting with the original story takes some of the focus off of us, which makes the reference feel like actual history rather than just a metaphor. Musically, this track brings more stellar harmonies, while pounding drums add to the sinister furnace imagery.

"Give It to Jesus" and "No Matter What" are two pretty ballads that give encouraging messages of Jesus taking our burdens and never letting us go. The only downside to these, as well as "This is Who I Am," is that after a few listens, you start to notice they sound similar to each other. "Self Less," though not as strong as other upbeat tracks like "Smell of Smoke," is still a fun quirky pop song with some hints of '80s pop. It's a nice break from the ballads before the next one, "I Believe You," which also has an encouraging message of Jesus' power and love for us.

And speaking of ballads, arguably the best one on the album is "Mother's Day Song," a sweet and funny tribute to the Heath's mom. The lyrics talk about her unconditional love, even when they wrote on the walls or wouldn't stop bugging her. They thank her for always being there and teaching them how to live for Jesus, singing, "The least I can do after all you have done / is thank you for being my mom." The countrified "Shake in His Shoes" is a fun track that could inspire a line dance or two. The lyrics, meanwhile, bring passages like James 4:7 to mind by reminding us that calling on Jesus' name and remembering His promises will "make the Devil shake in his shoes."

The album concludes with "We Choose Life," a timely anti-abortion song that's clear in its message without being scathing. The lyrics simply state their convictions with the line, "They say we have a choice because it's not a child / but we wanna hear that baby's cry. / We choose life." Both lyrically and musically, it's a powerful way to end the record.

While most of the tracks on Who We Are aren't as moving as "It is Well" or "Mother's Day Song," it's still a very enjoyable listen with amazing harmonies and earnest lyrics that even those who aren't fans of gospel can appreciate.