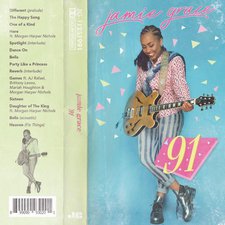 
On this, Jamie Grace's third full length offering '91, she has joined the rising ranks of independent artists giving it a go in the crowded music industry. This reviewer's question going into listening was, what if anything would change for her sound and subject material as an independent? The resulting album of songs sticks closely to themes she's covered before, and although the sounds are not innovative per se, there is enough freshness for both longtime fans and new listeners alike. Her messages of identity in Christ, celebrating what makes you different, and pursuing people with grace are much needed ones for teens to hear. Jamie delivers these messages well with a confident mixture of playfulness and grace.

"Different" starts the album off with a short prelude that is a call to celebrate what makes you unique, set to a country shuffle that breaks down into half-time hand claps. The "Happy Song" is another highlight that just makes you feel joyful. (It would be a great song to playfully torture a pre-teen with in the morning as they roll around in bed struggling to wake up.) It makes good use of a saxophone and buoyant lyrics like, "I can see the sun/and it's shining so bright/Haha So bright I gotta say that twice/I said "I can see the sun/and it's shining bright"/I can see the sun and it's shining bright. The short song "Spotlight" features some bluesy electric guitar licks and encourages the listener to, "dance like no one's watching/even though the spotlight's on me tonight." The song "Spotlight" rolls directly into the danceable song "Dance On" where it's near impossible to resist at least tapping your toes, much less throw inhibition to the wind and find a partner to join the fun. Song "Games" is a warning that there will be a lack of grace (pun intended) for those just wanting to stir drama and "play games." Jamie lovingly but firmly says, "I don't want no drama/I don't want no games/put it in the box/in the box where it came/put it in the box/I don't want to play."

"Daughter of the King" is a true standout of the album and probably this reviewer's favorite combo of lyrical depth and musical tone. The tempo slows to a simple guitar pluck and the message that, "The Maker of skies/the Maker of seas/The Maker of every beautiful thing/He made you, He/made you too/The mountain high, the river wide/He tells the sun when to set and rise/And He made you, He made you too/You're a daughter of the King/So tell me, what does that make you?" This would be a great song for an earthly father to sing over his daughter to reinforce her identity being rooted properly in the Heavenly Father. Musically, there are some country influences, and a sweet harmonious duet with sister Morgan Harper Nichols. Jamie Grace takes what is her biggest leap in subject material with the lyrical matter of song "Heaven (Fix Things)." The simple lead of a piano and the swells of strings serve the maturity of lyrics in this song well. She belts out this truth that we all need to be reminded of in times of suffering, "everything that's broken is in your hands/you hold the power to turn mountains into sand/you can make a river into dry land/but you won't always fix things this side of Heaven."

There is much to celebrate and enjoy here, however, the only minor quibble that can be brought up in this reviewer's mind is the lack of diversity in subject material. Will she further explore the depth of "Heaven (Fix Things)" and "Daughter of the King" on subsequent releases, or stick to danceable positive identity in Christ messages? Truthfully, there's room for both, and here's hoping she continues to deliver these important messages to the pre-teen/teen audience who need this type of reinforcement regularly. For '91, Jamie has definitely hit this target audience on the bullseye and longtime fans will be greatly pleased with this catchy, windows-down summer album.