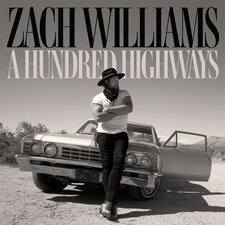 
In many ways, Zach Williams' now iconic debut album, Chain Breaker, released back in 2016, was a bit of a watershed moment for Christian music (particularly, the kind that is played on the radio.) With his gritty, "everyman" baritone voice, southern rock leanings and plainspoken, encouraging songs, Williams understandably hit big and helped the CCM industry understand that there is always a place for "blue collar" songs of faith on the radio and on stage. The title track from that album continues to be a staple for addiction recovery groups and showed what the power of a truth welded to a simple melody can invoke.

Williams' third album, A Hundred Highways continues this simple formula to (mostly) similar success, albeit, with a few clunkers (even if well-intentioned) in the mix. If there was an "Exhibit A" for what Williams does very well, it's the stirring and anthemic third track "Sunday's Comin'"; a simple tune of encouragement (something Williams does very well) that starts to soar in its second half (with a wonderful, restrained gospel choir) but never becomes overbearing or cliché. Similar in feel and tone to "Chain Breaker," the song works on a number of different levels and will sound great on radios in the near future. This is also true for 'Highway' songs like the somber and haunting "Heart Of God": Come, prodigal children, it's never too late / Run home to the Father, let Him clothe you with grace / And bury your burdens, break free from your fear / Step out of the shadows, there's no judgment here / There's only love in the heart of God / No room for shame in His open arms / There's beauty from ashes, so come as you are / And there's only love in the heart of God.

Williams also clearly knows how to write a southern rock song as well, and it's refreshing to hear loud guitars and drums on a mainstream CCM release these days. With a decidedly old school feel (think classic southern rock groups like The Allman Brothers or The Marshall Tucker Band), tracks like the opening "Big Tent Revival" and "Holy Rollin'" rock and roll like old AM radio hits. Also of note, historically speaking, is what sounds like a Zach Williams take on the Rolling Stone's classic (and thoroughly pagan) "Sympathy For The Devil" on "Praise Opens Prisons." And depending on your view of such things, this is either sacrilege or an act of redeeming a song and taking back the message. (This reviewer feels like Williams is purposefully nodding towards the Rolling Stones with a winking, redemptive eye.) Also dubious is the well-meaning, but perhaps a bit tone-deaf and cloying "Just Like A Billy Graham Revival," in which Williams wishes for the "good old days" of America when the King James Bible was read, and Billy Graham was preaching on TV. (However, they were not the good old days for everyone in this country.)

A song that does work well in this gumbo of southern music is the jokey and swinging "Jesus' Fault," in which the singer intones that if you don't recognize the new man that he has become, "well that's Jesus' fault." This sort of lighter bar room song would have been something that Johnny Cash would have been proud to write and sing night after night, and fits well in this classic tradition of Country Music songs.

A Hundred Highways, at a generous fifteen songs, is a moving listen, with tunes that travel all over the stylistic map, and show that even with a few missteps along the way, Zach Williams is a capable songwriter who has a wide appeal, a heart for the downtrodden among us and a great sense of history and melody.