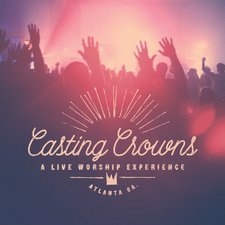 
Casting Crowns has been one of the biggest bands in Christian music for over a decade now, and they haven't slowed down. A Live Worship Experience is the second side album Casting Crowns has released since 2013's Thrive. This is an interesting album; Casting Crowns has never released a live worship album before, and the band's previous live efforts were mostly bare-bones companion efforts released between studio albums. On paper, this shouldn't be a great record, but it surprises quite a bit.

The album gets a strong start with "At Calvary," a song the band recorded on their Cracker Barrel exclusive album, Glorious Day: Hymns of Faith. A cover of the classic hymn of the same name, it works very well as an opener, jumping from acoustic guitars to the full band. Right off the bat, this shows what works about the album: Casting Crowns is a better live band than a studio one, and the audience interaction is strong. "Good Good Father" follows, and I know what you are thinking - another cover of this song? Well, somehow Crowns defies expectations here. This is probably the best version I've heard of this song; the entire band is utilized well here. Piano, violin, harmonies, and Mark Hall's passionate--but not overstated--vocals set this apart from the mediocrity that most covers of this song stay in. The same violin is again prominent here, and really sets it apart from most other versions - that and the slide guitar line. You can really feel the passion the band has for worship here.

"You Are the Only One," a track from Thrive, follows. It works far better as a live cut than it did on Thrive, but it's not anything special. It's a bit too derivative of pre-Zion Hillsong United. The band's cover of Crowder's "Here's My Heart" continues the trend of solid down-tempo worship songs. Hall splits vocal duties with Megan Garrett here, and it really works to set up the build. "No Not One" is an interesting choice for the band to cover; it's an older worship song (dating all the way back to Brandon Heath's 2008 album What If We), and is sung entirely by Garrett. Unlike Heath's version, this is an up-tempo track, and it works pretty well. It's probably the best 'rock' track on the album.

Sandwiched between four solid live versions of Crowns songs is "Called Me Higher," Melodee DeVevo's only leading track on this album. This is a really solid song. It's got a nice country/folk feel and works very well as a down-tempo worship piece. The Crowns covers that surround it ("Just Be Held," "The Well," "Jesus, Friend of Sinners" and "Thrive") are pretty much the same as their album versions. I like them all, but it's nothing new. I would have preferred if they had covered some of their older songs, though; "Who Am I" and "Praise You In This Storm" would be pretty obvious choices.

Probably the most disappointing thing about this record is the lack of bonus content. Most worship albums offer a "Deluxe Version" with more songs or some music videos, and the band actually recorded videos for most of the tracks for their YouTube channel. I don't want to call it bare-bones, but it's very unusual not to at least offer something extra.

In short, this is a very solid album, especially on the down-tempo covers. While the newer content is exceptional, the lack of bonus content and the large number of covers of recent songs bog it down a bit. But this is a nice side release for the band, and Crowns fans will eat it up.