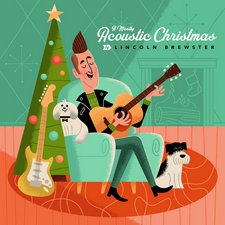 
Lincoln Brewster has had a career in the Christian music business for almost two decades after leaving a coveted job playing guitar for the iconic Steve Perry in the mid 90s. On this, Lincoln's second Christmas album, he may have struck gold for some of his long-time fans in a way he hasn't in years.

Gone are the synthesizers, sequencers and highly-processed vocals and effects on A Mostly Acoustic Christmas. Apparently, the approach was to strip down the arrangements and let the music and musicianship stand out. The featured musicians themselves are outstanding, including the jazz-rock standout Norm Stockton on bass and the rock-solid rhythms of Zoro on drums.

This album has a little something for everyone with fantastic arrangements and performances by all involved. There is great guitar here, but it also features solid traditional vocal arrangements on the classics and a few of the tracks seem to show quite clearly the fun those involved had in creating these renditions. All of the traditional carols are beautifully composed and several feature creative treatments. The production really stands out with lots of clarity, and all the instruments come through in the mix beautifully. I believe the sound of this particular album and the idea behind it lends itself to a timeless quality that will help it stand out from others. Special notice goes to the completely new, stripped-down arrangement of "Miraculum" with mandolin and Spanish-style guitar and "Spera in Deo," the new long-form instrumental lead-in to "O Come O Come Emmanuel," that features a passage of delayed guitar reminiscent of the great U2 guitarist, Edge.

The only problem I can see with the album is that there is a rather long drum solo (albeit, excellent and subdued) on one of the tracks that may not hold up well on repeated listens, and some of the applause and celebration (including barking dogs) toward the end of one of them was a little too enthusiastic for my taste. All in all, though, this is an excellent album by some very talented artists and it will likely inhabit a top spot in my Christmas album rotation for years to come.

Worship artist Lincoln Brewster is here with his second holiday-themed endeavor, A Mostly Acoustic Christmas. Judging by the title, it's pretty easy to tell the musical direction he's taken with this project, and it works quite well. While some of the same songs from his first Christmas album are featured here (such as "Joy To The World", and "Little Drummer Boy"); Lincoln effortlessly changes them up just enough to create a fresh, stripped down sound for his new record. Highlights include the new rendition of "Miraculum," the peppy "Jingle Bells Medley," and the aforementioned "Joy To The World." If you're a fan of Brewster's previous efforts, or just looking for a unique spin on Christmas classics, this album is one you won't want to miss this holiday season. - 11/13/19 James Larsen