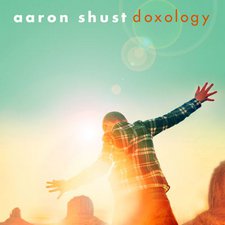 
The CCM industry has unfortunately not been kind to many of its artists of yester-year, particularly those who came to prominence in or around the first decade of the 21st century. The story often starts the same (new artist makes waves, possibly significant waves, with first national release), and then in most cases splits off in one of two directions; either that artist fades into obscurity when they don't adapt to trends, or (usually if they made enough waves in the first place) they do ultimately adapt to said trends and continue surviving on name-power and radio hits. For Aaron Shust's sixth career non-seasonal studio album in Doxology, that relegation to the name-power category stifles an album that might have had great potential into merely standard CCM pop-worship.

Aaron Shust has a lot more going for him than most artists stuck in the name-power category. He is a talented songwriter, with a deservedly-won Dove award to back-up that fact. He has made impressive and nuanced music; those who haven't, should hear his 2007 effort Whispered and Shouted. And it truly sounds like he takes time and effort on his theological content (it is this fact which is Doxology's strongest point, often shining through its standard pop-worship approach). As such, Shust never (with the possible exception of a Hillsong Live-lite "Triumphant Conqueror") lets Doxology fall to a point of the cringeworthy cliché or a total musical retread. His lyrics, while hardly original, are laid out in Psalmic simplicity that is easy to appreciate and reflect over. Musically, he has crafted a number of unique and catchy hooks, varied his instruments, constructed his themes, and arranged his melodies into a cohesive and complete listen. I doubt any seasoned listener of CCM (aside from Shust's longtime listeners who simply prefer his older folk-pop tinged material) will have any reason to truly dislike Doxology.

But I also doubt those same people will have any reason to truly like it either. Doxology follows closely on the heels of his previous two efforts, Morning Rises and This Is What We Believe; a mixture of hooky, up-tempo pop numbers and down-tempo piano numbers. While I cannot identify any particular piece that screams that it was constructed for radio airplay, several songs ("It Is Finished," "The Great Overcomer," "Never Gonna Let Me Go") display characteristics which would easily make them fit in that category. When it comes to what people think of regarding CCM today, Doxology checks all the boxes, both the good and bad ones. Listened straight through, it is a satisfactory worship experience. From an individual song basis, each is unique from each other and Christ is praised and revered. The dynamics go up and down in all the right places. One can expect and anticipate all the album's twists and turns for maximum emotional involvement. Even the album's musical, lyrical, and emotional highlight (Lauren Diagle's duet on "Nothing More") is a standard CCM album highlight. In short, Doxology is essentially the culmination of everything one might expect from a CCM album made in 2015.

It doesn't take a genius or a know-it-all to tell that Shust has everything he needs to create wonderful tunes (look no further than 2014's stellar Christmas album with full orchestra that could have made Michael W. Smith proud), but he is being limited by the constraints of what the greater Christian Music community expects of him. Thankfully, independence has been increasingly giving artists an outlet to circumvent those expectations, being able to make a living making music outside of the trendy box. Aaron Shust might truly benefit from such an independence. But for now, we can enjoy Shust's interpretation of what comes standard in Christian Music Industry today.

Citizens The Joy of Being (Phone Demos) [Integrity]