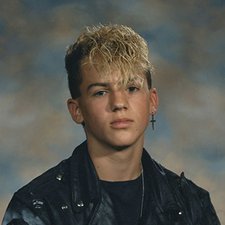 
Perhaps best known for his production and songwriting work with a multitude of artists over the past two decades, Aaron Sprinkle's vastly underrated solo projects should remain anything but unnoticed. Since releasing 2013's excellent Water & Guns after a long (solo career) hiatus, Sprinkle has been quite busy. Regardless of his other commitments, he has yet again delivered gold with his latest offering, Real Life.

The album opens with "Invincible," a melancholic '80s-style electro-dance piece featuring Elle Puckett on guest vocals. It's not the album's strongest offering, but it does a fair enough job of setting up the next nine tracks. It also succeeds in serving as a representation of what listeners can expect from Real Life.

Things pick up melodically by the time "Never Alone" rolls around, with catchy hooks and lyrics grabbing the listener's attention. The title track, "Real Life," features husband and wife duo Max Bemis and Sherry Dupree-Bemis (of Eisley). It's a great track, but is a step beyond quirky. Its lyrics are confusing ("save my birthright till I'm feeling up again / when I'm out the door and you get control / then you can take it in you can't help ignore / you wouldn't let me in / but this is real life") and its pacing and structure are even more so. The fact that Sprinkle made this piece work so well attests to his qualities as a producer; very few artists could have pulled off a song this complex.

"Not Listening" is one the best tracks on the album. It sounds as though it has a home on Water & Guns, and its lyrics are crisp and refreshing: "There's an ocean In this room and I'm the anchor tied to you / it's harder to walk by while you're sleeping / with the sound of the floor below me creaking / if the circle bends and shame begins again: I'm not listening / if the voices call from places I have been: I'm not listening." The melody and atmosphere are equally cutting, easily making for an album highlight. "Someday" continues this trend, also scoring a top slot on Real Life. His decision to feature Matty Mullins helped make this simple track into a masterpiece.

"I Don't Know Who You Are" features Stephanie Skipper (AKA Gotee Records solo artist Stephanie Smith) on guest vocals and is something of a minimalist (lyrically speaking) piece. It's most certainly catchy, though, and is the third alum highlight in a row. The electronic melody is a bit of a throwback, but if you can handle it, this gem just might be for you. "Wander" closes out the album on a somber note. It's the perfect closing track with lyrics that leave the listener feeling ever so slightly haunted: "I know you thought we were together / you hoped we made it through / but now my mind will always wander / wander back to you."

In truth, the only thing holding this album back is a lack of depth in both musical complexity and thematic (and technical) songwriting which were seen previously in Sprinkle's earlier projects. The spiritual themes are mostly veiled, and any serious attempt at application would constitute an overreaching of interpretation. Real Life also feels about two songs too short. One of Real Life's greatest strengths is found in its guest artists. They help to add an extra layer of texture, without outshining Sprinkle or being used in excess. While Real Life may not be Sprinkle's very best project, it is most decidedly an excellent addition to his discography and is worth diving into.

The Sprinkle family are legends in the Christian music industry. I don't think anyone could've thought that either Aaron or Jesse would have the careers they've had when two kids started Poor Old Lu in the early 90's. Aaron Sprinkle is renowned as a producer, with countless album credits to his name, but is also a talented musician, singer and songwriter. Real Life is Aaron's latest solo effort and is a pop album with a heavy 80's synth-pop feel -- very much the vibe you get when looking at the picture on the album cover. While the old school synths are strong on this one, the album still has the ability to resonate with a younger generation of pop music fans as Sprinkle is a master at putting together great sounding songs. On top of mixing some really solid sounds, Aaron also invited a fairly diverse crowd of guest vocalists like Elle Puckett (Poema) and Matty Mullins (Memphis May Fire) in to sing on Real Life. "Never Alone" and "Step Here" represent the more fun sounding pop tracks, while "Not Listening" offers an extremely catchy acoustic number and "I Don't Know Who You Are," featuring Stephanie Skipper, gives the listener a more serious and introspective side of things -- the latter two tracks are two of the best on the album. Pop fans should find plenty to be happy about with Real Life. While it's definitely influenced sonically by a past generation, Sprinkle manages to keep it fresh and interesting. While this isn't the best album Aaron Sprinkle has attached his name to, it does sound great and is something he should be proud to have written. Real Life just goes to prove that, although 90's culture is starting to resurface today, the 80's revival still isn't over just yet. - 3/21/17, Michael Weaver of Jesusfreakhideout.com

Aaron Sprinkle's Real Life is both youthful and sensible, energetic and subdued, adventurous and conscientious. This collection of polarities are likely what keep a tracklist of 80s-sounding synths and pop clichés from growing tiresome. As one would expect from Tooth and Nail's legendary producer, the album is expertly mixed and the electronic colors that Sprinkle combines work stylistically. The cover art and somewhat juvenile lyrics accurately point to the light-hearted fun that pervades these tunes, but it is also understandable if listeners desire a deeper experience from one of Christian music's most seasoned veterans. - 3/14/17, Mason Haynie

Aaron Sprinkle has been both the artist and the producer for many years. As the artist, he's spent most of his time in the world of alternative music, but his solo albums have drifted toward electronic and pop music. Real Life is a solid set of these pop tunes that bear more resemblance to Fair than to Poor Old Lu; in fact, a track like "Not Listening" would have almost no trouble sneaking on to a Fair record. "Invincible" is a great opener with a dancey beat and a strong appearance from Elle Puckett (Poema, Eisley). Speaking of Eisley, the title track features said band's lead singer Sherri Dupree-Bemis and her husband Max Bemis for what ends up being the clear-cut lead single. Mild dubstep and 80s pop synth dominate and it's just gorgeous. I'm also fond of the Middle Eastern sounds of "Step Here," which tend to get stuck in my head for a long while. Aaron Sprinkle is a master of the craft, and Real Life is easy to put on repeat. In fact, I recommend it. - 4/11/17, Scott Fryberger of Jesusfreakhideout.com