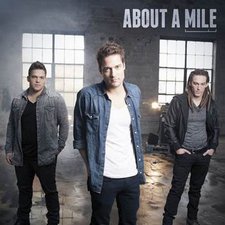 Summer is the perfect time to discover new music. Long road trips provide ample time for trying out new music, there is generally more leisure time in the schedule, and ample sunlight creates more Vitamin D in the brain, making music buyers more optimistic about taking a chance on a new artist.

Hailing from the blue collar town of Pittsburgh, Pennsylvania, new Word Records recording artists About A Mile traffic in the kind of sincere, rough-hewn pop-rock and roll that draws comparisons to Kutless, 3 Doors Down and Lifehouse, the three Klute brothers bring the passion on their self-titled debut album that features the powerhouse production credits of Howard Benson (Skillet, Third Day, Daughtry, Blindside, P.O.D.) and Ian Eskelin.

"Satisfied," the album's first track and lead single, grips the ears immediately with its tuneful, yet rocking prayer to "let your song be the song I sing, through the blessings and burdens this life will bring." As a debut single, "Satisfied" scores big points for a huge hook and impassioned delivery. There are very few gravely-voiced lead singers in Christian Music these days, and Adam Klutes' sandy, yet low-key vocals give About A Mile's songs a subtle edge that helps them stand out in today's worshipful pop-rock marketplace.

Second track, "Power Of The Cross," does much better than its overused title suggests it should. With subtle strings backing up the powerful music, this song serves as a bit of a microcosm for the whole album. The sound of About A Mile may be familiar (especially if you've been listening to the radio intensely for the past fourteen years) but it is done especially well, and it's difficult to not admire the heart that the three Klute brothers bring to the table. Passion should count for something, and it comes out in spades on About A Mile. The band will no doubt stretch a bit on future albums, but for now it's fair if a band's debut largely salutes their influences.

So give these three young men from Pennsylvania a chance on your car radio as you drive to the beach this summer. Your speakers and your hearts will thank you. Passion is a funny thing; it covers a multitude of musical shortcomings in the same way abundant sunshine can turn even the most mundane days better.

About A Mile enter the scene with a lot going their way. The band, consisting of three brothers, has all the charm of Lifehouse and singer Adam Klute has the voice to match. The group's lead single, "Satisfied," has had more than one person scrambling to find out about what they thought was a new Lifehouse single. What they found instead was the new Word Records trio whose name is a reference to the approximate distance Jesus carried His cross. While tracks such as "Satisfied," "Oxygen," and "SOS (Hope Won't Let Go)" make the record a win, others such as the poppier, and somewhat forced, "In With the Out Crowd" and "I Hate Hate" definitely detract. The top notch production team of Ian Eskelin and Howard Benson keep the brothers on point for the most part and the sound is overwhelmingly similar to Lifehouse outside of a few stray tracks. About A Mile haven't set any milestones with their self-titled debut, but they have opened eyes nonetheless. If the early success, and continuous airplay, of "Satisfied" is any indication, About A Mile should find their way into many people's collection of music. A couple of missteps and a bit too much predictability keep the album from being amazing, but it's a nod to Word, as well as their family of labels, and the new collection of talent they have been accumulating recently. About A Mile has joined the likes of Francesca Battistelli, for King & Country, and even Family Force 5 and have easily become a band to watch for in the future. It's not a perfect debut, but it should provide more than a few enjoyable spins with songs like "Oxygen" for one to really latch onto. - Review date: 2/13/14, Michael Weaver