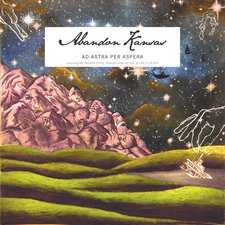 After spending several years as an independent band, Gotee Records picked up the foursome known as Abandon Kansas. The group gave fans a taste of what to expect from the band in the future with the release of their We're All Going Somewhere EP in 2009. Now they are back with their first full-length album on Gotee, Ad Astra Per Aspera, a title which mimics the Kansas state motto, To the Stars with Difficulty.

The rock flair on the We're All Going Somewhere EP will actually mislead fans if they are expecting a similarly paced rock album. Ad Astra Per Aspera is a much slower indie rock album with only hints of a pop influence. The guitar work is often an object of enjoyment particularly in the case of the opener, "Heaven Come My Way." The album continues with "Lair," a modest rock track which becomes a highlight when Tim Skipper (Lead singer of House Of Heroes and a fellow artist on Gotee) lends his vocals to the song. "Like It Or Not" is easily the most upbeat song on the record, complete with a catchy chorus.

Lead-singer Jeremy Spring's vocals don't sound very enthusiastic, causing the rest of the album to feel a little lazy. This works to make the album more attractive from an indie perspective, but may well cause casual rock listeners to get a little bored. "The Golden State" and "Where Else Can We Go" are lacking in energy though the latter track is no less effective. On the surface, there are a few tracks that don't hit the ground running, but finish well for those listeners who stick it out. The final track, "Give & Take" likewise starts very slowly, but has an epic finish.

Lyrically, the band has improved from their EP, and has become more profound and spiritually thoughtful. "Heaven Come My Way" is simple in its plea to Heaven for help, but the singer on "Learn" desires to follow Christ in a way that would not shame Him ("Hear me when I pray / I could never think to lead a child astray / I'll follow You so they can follow me / Listen closer"). "Where Else Can We Go" combines elements of John 6 and Romans 1 while contemplating God's undeniable fingerprints on our lives ("If pain produces harmony, we all have a note. / If God conducts the symphony, no one sings alone").

Ad Astra Per Aspera is a good album that definitely takes Abandon Kansas in the right direction. The songwriting has improved with more complexity, and their music has become more distinctive and memorable with their slower tempo. Still, it also means that listeners will have to pay more attention to the album, both to the themes and the music, to get the most out of it. So while this may not be the one album to listen to cranked up while your car window is down, Abandon Kansas's first full-length project on Gotee is a solid indie rock outing and one worth checking out.

Rough starts are unfortunate, but when a band figures out what they do best and capitalize on their strengths, the end result is all the more worth it. Such is the case with Gotee Records' rock quartet Abandon Kansas; their debut EP introduced listeners to the mullet-wearing indie rockers from the Great Plains, but while it showed experience, plenty of growing room was evident. Ad Astra Per Aspera, Abandon Kansas's full-length offering on Gotee, takes the band's unrefined pop-rock sound up a notch and it makes all the difference. Unlike their aimlessly-delivered EP, Ad Astra... is well-defined and professional. While listeners should once again expect distorted guitars and Jeremy Spring's trademark raw vocals, tracks such as "Heaven Come My Way" and "A Conversation With the Sky" show their expertly-crafted musicianship effectively, while the more thoughtful "The Golden State" and "Where Else Can We Go" display the band's care for variety. While we're not spared trivial break-up songs like "Liar," AK doesn't shy away from digging deeper either ["Wings (Fear of Heights)" and "Learn"]. Closing with the album's best track, "Give & Take," the band comes around with some of their most profound, and convicting, lyrics to date ("Am I more than the sum of the things I have and haven't done?" and "We've been falling before we first stood up"). Top it all off with a guest appearance by House of Heroes' Tim Skipper and Ad Astra Per Aspera is a winner. Though Abandon Kansas's approach can still tighten some things up, in the meantime, their current course of wonderfully executed indie rock continues to grow on the listener. - Roger Gelwicks, 3/3/11