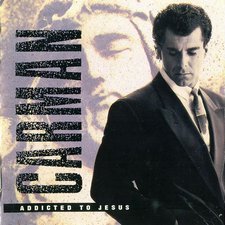 
How many albums offer pop, hip-hop, rock, country, adult contemporary, and even radio drama all on one nine-track album, while maintaining consistency on every track? Not very many, but the Renaissance man named Carman Licciardello (AKA just Carman) has managed to impressively pull that off in his 1991 album, Addicted to Jesus.

The first minute is very skip-worthy, but don't let that turn you away. This section of the song features melodic piano and children reciting a school prayer, as well as a cheesy news report, but in the next minute, the track transitions into a solid rock song about standing up against the wiles of the devil in a world that has continually turned against Christian principles. Petra is also featured in the song, but sadly they contribute very little singing. Nevertheless, the song gives the album an anthemic opener not to be missed.

The opening track is followed by "Holy Ghost Hop," a funky electropop song with lyrics that may seem strange on the first listen; "Satan, Bite the Dust," a radio drama track; "1955," which rolls country, rap, and gospel into one song; and the ballad "Hunger for Holiness." These first five tracks show unprecedented variety, but nowhere in the mix could you forget that these are distinctly Carman songs.

Next come two hip hop offerings, "Come into This House," featuring Commissioned, and the title track, featuring DC Talk in their early hip-hop days. The latter hip-hop jam is probably the strongest cut on the album, complete with a sick TobyMac rap in the bridge. Afterwards comes the soothing and simplistic ballad "Jesus is the Way," complete with a children's choir. The album could end here, but it is completed by another radio drama track about a dying man going to Heaven.

My initial disappointments with this album are the radio dramas (which only seem fit to be played while being alone, not in the background during a party). Thankfully, if you don't like those tracks and will be listening digitally, it is quite easy to not download them or add them to your playlists. The other annoyance in the album is the banter at the beginning of "Our Turn Now" and "Addicted to Jesus," which sadly aren't separate tracks. Thankfully, in the end, Carman's strong vocals, unique lyrical style, and ability to pull off multiple genres can make the small flaws quite dismissible. Don't pass on this great piece of Christianity-infused art.