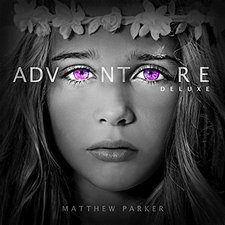 
Matthew Parker is equal parts electronic pop, ala Owl City, with EDM flourishes of Justin Bieber, and much of this reissue of this deluxe edition of Adventure stands up well to much of what is current in mainstream pop music. Let's start with what works, like the title track, "Adventure," which sounds most like the aforementioned Bieber. Other standout songs include "Ghost," club banger "Down in Flames" and the album's best overall track, and highly danceable song, "I Ain't Got No Money."

Other tracks this reviewer enjoyed were "System Victim," and the repetitive but pleasant "Remember Me," which plays as the best slower moment of the set of songs until the last two minutes close with the playful side of Parker's personality.

The biggest drawback from the album as a whole is its length, as well as a few good, but not great songs that seem like filler, like the two closing tracks, "Fly" and "My Love." They're not bad songs by any stretch, but they don't standout enough to include.

So what's new about this deluxe edition? Two all-new songs are added: "Never Giving Up on You," which has a nice sentiment, but a blandness to its sound, and "I Won't Look Back," which just has a sameness about it that keeps it from standing out. Followed by the two new tracks are a remix of "Adventure," which amps the original to new heights into a full-on club dance party--only to end with a simple and sweet piano, and a medley of songs from the album given the acoustic treatment, which works, but may only appeal to the diehard fans.

All in all, Adventure is a great, upbeat album, with select songs tailor made for a workout mix or dance party. As an overall album, its runtime drags on and would have fared better to have 2-3 songs trimmed from the original track list. This deluxe edition doesn't add anything "must-have," save for the biggest of fans of Parker, but will hopefully grab a few new listeners of the genre that missed it the first time around.