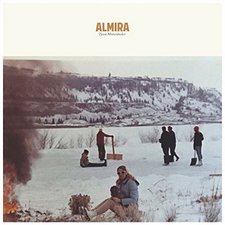 
Many a Christian music fan were pretty surprised when legendary indie/rock label Tooth and Nail Records signed a folk singer/songwriter back in 2015. Of course, when the earnest heart, minimalistic beauty, and mature storytelling capabilities of Tyson Motsenbocker shone throughout his debut, the world made a lot more sense. After the solid release that was Letters to Lost Loves, one might expect Motsenbocker's next project to be more ambitious in scale. Instead, what we get is Almira, a 5-song EP that clocks in at under 20 minutes and is probably all the better for it.

The title track gives listeners everything that they've come to know from Motsenbocker: simple acoustic picking, clean yet cutting vocals, and a lot of empty space to let the lyrics breathe. On top of this formula comes an effects-heavy electric guitar in the bridge that increases the song's memorability. The lament of an old relationship is painfully clear here: "I saved all your voicemails/After you were gone/Asking me to call you back/From the great beyond." Motsenbocker is also careful to pay homage to his rural roots in Washington (hence the town "Almira"), while maintaining focus on the heartache.

"Memphis" opens up with a lively rhythm section, and it's clear from the key, chord progression and vocal melody that this tune is essentially part 2 of "Almira." While the title track was sullen, the energetic instrumental performances on this one invoke more of a sense of angst here. This kind of continuity brings the narrative to life and shows that important stories have multiple sides to them. It's actually quite an artistic move for a folk singer to make.

Motsenbocker dives more into country sensibilities with "You're Still Here." The background vocals are a nice touch, and the timely electric guitar licks help elevate this song, but it still feels a little lackluster in comparison. The theme of traveling through different narrative moods continues however, as this one comes across as a little more optimistic.

The single, "Coeur D'Alene," opens up with a driving beat and an infectious guitar tone, and it holds onto that vitality the rest of the way through. It's probably the catchiest thing Motsenbocker has ever released, and the fast vocal delivery makes it the standout of the EP. On the flip side, "Rust" is definitely his most experimental track, as thumping electronic percussion and synths are present throughout. These contrasting elements are expertly handled since they are very light in the mix, permitting Motsenbocker's vocals to take center stage. Even if fans aren't expecting this move, they'll likely appreciate that it still has the emotional emphasis of a Motsenbocker tune.

Some may want more than 18 minutes of Motsenbocker, but Almira is definitely sweet because of its shortness. Letters to Lost Loves' length made it a bit stale over time, but Motsenbocker's laser focus here serves the narrative well and empowers new musical ideas to start to form. Although he does not venture far from the tried and true themes of love and loss, Almira is an EP that's heart is home, and thus, feels just like it.