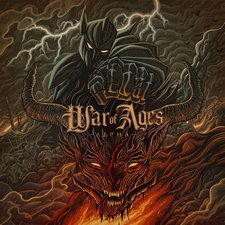 
Unless you're a metal fan who's been living under a rock, you're already well aware of the band War of Ages. The Facedown veterans are releasing their 8th album since first signing to Strike First way back in 2005. Return to Life featured the band in what appeared to be a bit of a rut, but Supreme Chaos saw them come out of that rut in a big way. The band's lineup has changed some more since the last outing, with them adding another new bassist and replacing long time drummer Alex Hamp. However, the three returning members, founders Leroy Hamp and Steve Brown, along with Jack Daniels, form a strong core. Guitarist Jack Daniels seems to be the spark that ignited Supreme Chaos, and that spark continues to grow for their newest venture, Alpha.

Metalcore has always been the name of the game when speaking of War of Ages, but the band seems no longer content is just chugging their way through ten to twelve songs. There are certainly heavy chugging moments highlighted throughout the runtime, but the melodic clean vocal sections sound phenomenal, and the guitar leads and solos are really on point. The opener, "Buried Alive," makes a good example of the aforementioned points. A heavy riff and screams start the song off, but the chorus opens up into a huge melodic hard rock anthem. To top it off, the guitar solo is super complimentary, but isn't some canned or expected solo either. "Creator" and "Cut Throat" continue the trend, but the blistering guitar solo that closes the latter out is a nice touch -- the only complaint is that it's so short. "Fullness" is another nice touch as it starts off more like a hard rock song before shifting into a faster metalcore riff complete with screams and pinch harmonics before shifting to another huge melodic chorus. While the album continues on the same pace for "Hollow Point," it does shift gears quite a bit for "Immunity Revoked." A lot of the instrumental is clean, but it does have its moments of rock and metalcore elements interspersed. The guitar work is fantastic and it becomes one of the best listens on the album. What I like most is that it's a full four-and-a-half-minute long instrumental that is well planned and executed and not just a quick interlude.

The back half of the album stays strong with the same formula. "Mind Control" has a great riff and some eerie keyboards playing in the background really giving the song a cool mood. "Repentance" forgoes the big melodic chorus for a more open and airy approach that brings the vibe down a touch before picking back up to full throttle. "Warfare" is a head bobber from front to back with an excellent groove and also features another impressive guitar solo. Finally, "Warrior" closes the album out with one of the overall heaviest songs present. While it closes with clean vocals, the rest of the song is all chunky riffs and screams. As expected with War of Ages, and pretty much every other Facedown artist, the lyrics remain spiritually focused throughout Alpha. It's nice to see that even though the music is evolving, the message is staying clear and true.

Each listen turns up some new nuance that was unnoticed on the prior listen and unlocks a slightly different perspective. It may be a certain guitar part, or a hidden keyboard or electronic element, but you tend to pick new things out in songs on repeat listens. Alpha is an excellent follow-up to Supreme Chaos, but I can't help feeling the predecessor was just a tad bit better overall. Regardless, War of Ages have released another remarkable album to add to their discography. Longtime fans of the band should be pleased, but metalcore and hard rock fans in general should also be pretty stoked about this release. It's late in the year, but I have a feeling Alpha will end up on a lot of listeners top 10 lists for 2017 -- mine included. I'd highly recommend this record as one of best heavy albums this year.