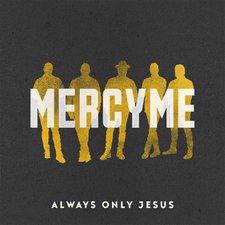 
MercyMe has been around for as long as I remember loving music. Staying fresh after countless hit singles, twelve label-backed albums, six independently released records before that, and now twenty-eight years as a band together is no small task. It's rare, and it's commendable. Still, every band together as long as they've been will create a few duds among their releases and face the temptation to phone it in. Thankfully, MercyMe has remained an upper-tier CCM act for more than two decades. To me, 2021's offering Inhale (Exhale) was a rare misstep, sounding to this reviewer's ears like a bloated mixed bag of clever wordplay and well-worn (aka cliche) radio-ready pop. Ultimately, the album's biggest sin was being forgettable, save a song or two, with the four-year wait between albums contributing to the disappointment.

With their follow up, they don't make fans wait nearly as long, dropping their newest album, Always Only Jesus, with a trim ten-track set just over a year-and-a-half later. While it's not a tremendous improvement, it is enough to take notice of the effort to deviate from their tried-and-true formula. This is best seen on the rousing opener "Hands Up," which features a drum line percussion, clipped phrasing, and the type of hook that has garnered mainstream band Imagine Dragons a zillion streams. This is the type of song that was meant for the radio in all the right ways. It's such a good time that any trend-chasing accusation is quickly forgotten in favor of toe-tapping and drumming on whatever is nearby with a big smile on your face. Finger snaps, similar staccato singing, and big drums keep the fun rolling on "Better Days Coming," which also features the encouragement "if it's not good/then it's not over yet" lyrically. "Lost in You" is another mid-tempo highlight with lead singer Bart Millard's falsetto tastefully front and center demanding (gently) that listeners take notice. Lastly, "Then Christ Came" takes the slow burn piano ballad approach, one they've utilized to great effect before, nailing it once again here. It's easy to hear why this was one of two singles pushed to the radio before the release of the album. The second half of the song takes on an infectious bounce backed by the joyous declaration, "then Christ came/changing everything/He took my sin and shame/now every song I sing will be for Him."

The rest of the album is solid in support of these four main highlights, but is certainly not nearly as memorable, meaning the album falls somewhere in the middle of their extensive discography in terms of total enjoyment. Nothing present is as bland as some of their biggest album misses (Inhale (Exhale), The Hurt and the Healer), nor as arresting as their best (Welcome to the New, All that is Within Me, Lifer). There are some highlights here, sure, but nothing cohesive or super-fresh. Longtime fans will find more of what they've come to expect and love: catchy, radio-ready pop with a focus on Jesus and encouragement for the weary believer. That isn't a recipe for every listener to love, but it certainly has its place and purpose.

All in all, this is a safe play back to what has worked before, with the slightest of tweaks. Ultimately, nothing on Always Only Jesus reinvents the wheel, but sometimes rather than innovation, a good dose of the familiar is all that's needed. MercyMe has still got it and shows no signs of letting up, and for this, the CCM world should be grateful.