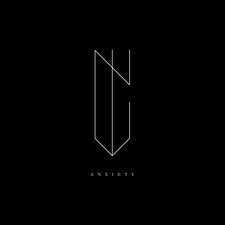 
Last year, much excitement was birthed when longtime Demon Hunter frontman Ryan Clark announced a partnership with former Project 86 guitarist Randy Torres. And what fan of these bands wouldn't be excited? These bands are legendary in Christian rock and metal. Even when we found out that NYVES was going to be an electronic/industrial project, interest was still high, as evidenced by a 165%-funded Kickstarter. Now, to kick the summer off, NYVES - in conjunction with Spartan Records - are bringing us their debut project, Anxiety. Does it meet expectations?

As one might expect, and according to the NYVES' Bandcamp page, Clark takes the reins on vocals, while Torres handles the music and production. Torres does a stellar job with his portion, mixing the industrial sounds of Nine Inch Nails and Mortal with some new wave and early alternative influence of Depeche Mode and New Order - I even hear a little bit of the short-lived duo The Foxglove Hunt, and not just because they and NYVES both cover The Psychedelic Furs' "Love My Way." Torres easily puts Anxiety up there with some of the best of the genre, as he has a firm grasp on it, and he knows how to illicit different emotions throughout this album. The music in songs like "Something Divine" and "Fools" carry a dreary and somber feel, while "Smoking Gun" and "Love My Way" may be enough to coax you to get up and dance a little. I would actually love an instrumental version of Anxiety.

Clark's voice is unmistakable here, and his vocals mix with the music fairly well. Demon Hunter fans be warned: this is not a metal album, and there is no screaming here whatsoever. If you enjoy Demon Hunter's rock ballads, you may be more apt to enjoy Anxiety. However, unfortunately, hearing a full, eleven-track album's worth of his clean vocals isn't as exciting as you might think; a lot of these songs display Clark's deeper vocals, and it tends to be wearisome. He does sing higher notes on occasion, such as in "Fall Behind" and an album highlight called "Idle Thoughts" (though not exclusively these songs), but for the most part, I find myself wishing for more instrumental segments and less droning, rock & roll vocals.

Lyrically, as is consistent with the genre sometimes, NYVES takes the route that makes the listener say "Wait...what was that song about?" It's signature Ryan Clark, albeit quite a bit less spiritual, and a lot more cryptic. There are moments where it's more clear than others, such as the opening track and first single, "Return," which appears to be sung from God's perspective: "Where do you go, I've seen you wander off alone into the cold, the darkness overtakes you whole, I wanna know are you still the one who's in control, out on your own, when you feel it caving in, come home, whatever it is, no matter the cause, return to Me." Of course, "Something Divine" showcases a desire for more out of life, and "Fools" reminds me of Proverbs 26:12 ("Seest thou a man wise in his own conceit? there is more hope of a fool than of him"). But songs like "Parasites" ("For us there will be no idle threat, no trust, in the absence of a call we rust, we will gladly turn it all to dust, now that the world has gone to Hell, we can live our lives, and nobody will ever tell, that we're parasites") and "Idle Thoughts" ("When the call is all I feel, and the end it's all I need, I embrace the coming bleed, in the void of disengage, I escape into my grave, where the dream is all I save") require a little more probing and examination to discover the hidden meaning.

So, to answer the question I posed in the first paragraph: no, Anxiety didn't quite meet my expectations. It's a fine album that has its clear moments in which it shines, but overall, it has this tendency to become rather tedious to listen to all in one sitting. That being said, there are a lot of people who are going to love this album (and again, it does have its fair share of highlights). I'm definitely going to keep NYVES on my radar for future releases. Given the track record and impressive discography with this duo's respective bands, NYVES has a lot of potential to create something truly outstanding. Here's hoping this isn't a one-time thing.