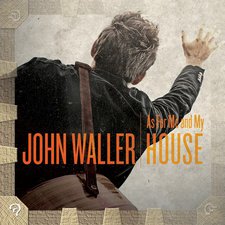 John Waller
As For Me And My House

Up to this point in his career, worship leader/singer-songwriter John Waller has been one of the many quiet, unheralded pop worship artists scattered throughout Christian music. His third studio album, As For Me and My House, probably won't change that, although it is satisfying in its simplicity.

While labeled as a worship artist, Waller avoids the arena-sized bombast common with big praise and worship bands like the many iterations of Hillsong. Instead, he takes a mellow, slightly folk approach, sprinkled with some pop rock sensibilities appropriate for radio play. In fact, As For Me and My House is at its strongest when it doesn't try to do too much. "Our God Reigns Here" struggles too much to be anthemic, and the title track attempts to be steady and profound, but ends up simply being dull. Meanwhile, "The Marriage Prayer" and "Somebody Else's Story" are quiet folksy tunes that come across as being much more sincere. At the same time, "Yes" is a surprisingly capable pop rock song with a catchy, upbeat chorus.

Thankfully, Waller also avoids the typical worship tendency to fall into generic, uninspired lyrics. While many of his tracks are certainly not groundbreaking, songs like "Bless Us and Keep Us" show welcome references to Scriptures that one wouldn't expect to hear. The aforementioned "Somebody Else's Story" also has a welcome theme, as Waller expresses a desire to be used in God's plans for bringing someone to salvation. "Man of the Valley" is another very capable country/folk track, where Waller demonstrates that the greatest spiritual growth happens in life's valleys.

As For Me and My House probably won't garner a lot of attention, but it is a solid, better than average worship/pop album. John Waller has shown that he is capable of writing simple, appealing tunes and coupling them with thought-provoking lyrics, and the end result is a definite success.

John Waller's latest album opens with "Our God Reigns Here," which although it was on his previous release, features better production quality. This track also really sets the tone for the album, declaring the sovereignty of God from the beginning. This theme continues throughout, especially on "Because God Is Good." It's all about life not going the way we hoped it would but God still being good. "Man of the Valley" echoes the same feelings as John sings of how those "mountain top" experiences are great but most of our stories are down in the valleys of life. And it's in those valleys, Jesus really walks with us and shows us that His ways are higher. The songs have simple meanings and don't try to announce it with eloquence; it's that raw and honest presentation that makes these songs hit home.

Waller also gives a few songs that are sure to be heard at some weddings. "The Marriage Prayer" is an honest one between a husband and wife asking the Lord to bless their marriage by loving each other the way that He has designed. Whether you are a newlywed or you've been married for 72 years, this song really should resonate with anyone who listens. "Bless Us and Keep Us" is another song of declaration as it is just pure scripture being sung over families, sons, and daughters. It is undoubtedly the most impacting as it feels like an honest prayer that John wanted to give to every listener. Waller's newest release is definitely his best so far. It is full of biblical lyrics, catchy melodies, a pinch of folk, and thankfully has musical depth that adult contemporary music tends to lack. And for that, I say, well done John Waller! - Ryan Barbee, 5/1/11

Buy It: City of Peace