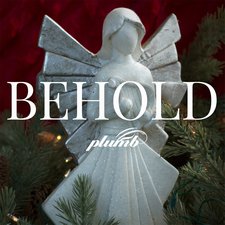 
In 2019, Plumb releases her first Christmas project in the form of a double EP set. Her first release debuted just before Thanksgiving, highlighting the spiritual side of Christmas, titled Behold. A week later, the singer/songwriter debuted a second EP, It's Christmastime, which spotlighted more of the lighthearted and traditional side of the holiday season. (And, for my review of that one, click here.) However, 2011 saw the artist's first exploration into Christmas music on her own with the release of two indie singles, "What Child Is This," and her own original, "It's Christmastime." And although she's appeared on a few Christmas tours through the years, this is the first time fans are getting proper Christmas releases from Plumb.

Right out the gate, "Oh Holy Night" is a bold and beautiful introduction to Behold that starts off soft and swells to a spine-tingling conclusion. As a song fans may have heard her perform live, it's a chilling rendition that really showcases Plumb's vocal range and power. "Oh Holy Night" has long been one of my favorite spiritual Christmas songs, and this may be the best rendition I've heard to date. Changing things up a bit is her take on "The Christmas Song," giving it a classic jazzy feel. I feel like it's one of those older tunes that isn't given a worthy updated version very often, but Plumb does a stellar job, even including a solid guitar solo that fits right in.

The only original on the release is the title cut, "Behold," which is a worshipful welcoming of Jesus for the Christmas season. It's a great song, and thematically fitting for this kind of release, but it doesn't quite capture a Christmassy feeling. It doesn't really feel much different than the usual worship single one might hear on the radio or in concert, but it is still a cut above the rest like it. (It does feel like it'd fit right in on her worship album, Exhale, from a few years ago.)

Things shift back to the familiar with "My Favorite Things," from The Sound of Music. It's not really a Christmas song, but it's one that often gets airtime this time of year. (Even Family Force 5 put it on their Christmas album ten years ago.) The song's orchestral and cinematic treatment here gives it a significant Christmas vibe and it's definitely a highlight of the EP. To close out the short collection is a soft medley of "Silent Night / Away in a Manger" as a duet with indie artist Young Oceans. It's a great close to the EP, and takes it out in a similar reverent and soft fashion to how it began. (Although, I'd be curious to hear this track as a solo offering from Plumb and not as a duet.)

Plumb's Behold EP, especially coupled with her It's Christmastime EP, are such a welcome addition to the holiday music rotation. I would have loved to have seen her add her version of "What Child Is This" to the track list, but as it is, I can't recommend these two projects enough.