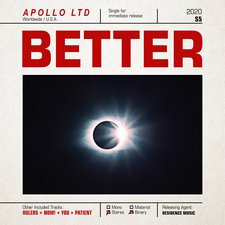 
For music fans who are more accustomed to listening to full albums (and in their physical forms), it may take some time to get used to the current trend of focusing heavily on releasing singles, and the concept of each new song joining its predecessor to create a growing EP. Label Centricity Music have been championing this method for releasing new music, and Apollo LTD is just one of the artists on their roster who utilize this process. The band's latest single is "Better," which joins four previous singles to form its own little EP. These songs are all supposedly part of the band's forthcoming 2021 studio album, so it gives listeners a nice sneak peek at what's ahead.

Apollo LTD, which is comprised of Jordan Phillips and Adam Stark, started their tenure with Centricity on the label's more mainstream focused Residence Music, but after the release of their 2019 album, Out of Body, each of their subsequent releases have been given a bit more of a push toward the Christian music market. The upside to this is that the duo's lyrics are a bit more spiritually focused, which is great for anyone looking for something that's more outside the norm from the standard CCM radio fare. Apollo LTD might bear the closest resemblance right now to the more indie-pop Paper Route, having a bit more of an indie / electro-pop sound than what you usually find in the current CCM trends. And since the pair focus their lyrics more so on the Christian life than Sunday morning worship service material, they bring to mind the golden years of the Christian music scene.

The newest addition, and EP's title track, leads off the 5-track batch. Because each new song is added to the top of the playlist, there probably wasn't much thought put in to how the songs play out here, but this time it works well, thematically, with the current state of our world. Let's be honest, 2020 has been a rough and exhausting year for many. "Better," which most likely was penned before the global pandemic, is quite timely. The slow and funky tune offers the chorus, "I need to know it's getting better, a little light so I can see. Say the words so I remember. Say it loud so I believe. I need a little bit of hope for the hell in my head, to get me through the storm cuz it ain't done yet. I need it more than ever. I need to know it's not forever. It's gotta get better." (The use of "hell" there is a bit iffy, however.) It's an appropriate anthem for those looking for a little encouragement to just make it through another day. "Patient" slows things down further, also speaking to the heart of someone trying to find a little hope, "When my world keeps on shaking and I'm breaking. When the skies won't stop raining and I'm fading, help me to be okay with what I can't change, and remind me there's meaning in the waiting. Help me to be patient." 'Catchy' is one thing Apollo LTD seem to have a handle on, and these songs, even when they're more somber offerings, still give you something to move and singalong to.

They kick the funky up a notch or two for "Rulers," a song that would have been a perfect lead-off track if this were a more official EP. Lyrically speaking, the word "rulers" usually carries a negative connotation in scripture, but the band takes the Romans 8:17 approach, celebrating the fact that God's children are heirs with Christ. It's a bit of a rally song and serves as another encouraging song to set our eyes on the prize, and not the obstacles directly in front of us. "Now!" is the height of the energy on the EP, another great anthem that encourages us to seize the day and live in the now, "Somebody told me, take it slowly, even if the sun goes down, the stars come out. We live in the now. Why the worry, such a hurry, I know in the end somehow, it all works out. So live in the now!" "YOU" then wraps this collection up beautifully with an emotional ballad about accepting who God made you to be (a message that the world has certainly perverted in recent years, but one that--in the right context--Christians can still benefit from). The song gets right to the heart of it with the opening verses, "Have you ever felt like you just couldn't be yourself. It could be easier if you were someone else. Is there a voice inside your mind that reminds you all the time the way you're broken? Has it left you hopeless? It can be a hard, hard thing just being alive. It can be a dark, dark thing when you're trying to hide." But the chorus kicks in with a gentle reminder from Psalm 139:14, "Every story, every scar, you are loved the way you are. There's nothing you need to prove. Cuz Heaven knows your name. There's a reason you were made. Fearfully and wonderfully YOU." And before the song's end, they leave the listener with a one last plea of encouragement, "Don't give up, don't give up. He's not given up on you. Not given up on you."

While fans of alt and indie pop may find Apollo LTD riding the line a little too closely towards radio pop, they stray from it just enough to stand out from the rest. Soaring vocals, infectious melodies, and lyrics that encourage the weary soul, Apollo LTD's Better EP is just what many listeners need right now, and serves as a great teaser for more to come from Stark and Phillips.