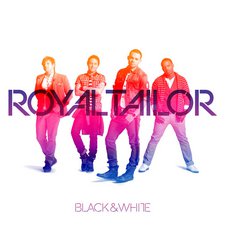 Sometimes, an appealing beat is all you need to catch someone's attention. Putting on live shows and youth conferences for the last five years, Royal Tailor grew out of a heart for ministry, and when their independent EP fell upon the ears of worship quartet Leeland, it was hastily sent to Essential Records, and the rest is history. With that, Royal Tailor's debut album Black & White has made its move, if not with mixed results.

It would be extremely easy to call out Royal Tailor as unfocused, amateur, and gimmicky, and on the surface, it sure looks that way. The artists that influence Royal Tailor's Black & White, such as Maroon 5 and Bruno Mars, are undoubtedly more experienced and proficient, and there's plenty of growing room for the quartet to fill, both musically and lyrically. Even bands that boast the same genre "smash-up" like Paper Tongues feel more practiced in their end results. In a sense, it's sometimes tough to take the record completely seriously when there exists the cheesy synths of "Make A Move" and "Wannabe" or the not-quite-anthemic structure of the title track and "Run to Love." The variety displayed here is inarguable, but it can sometimes lead to disjointed and unpolished points on the record as a side effect.

Even so, their greatest fault is also their greatest asset; it's not too common to find such a mishmash of genres as Royal Tailor's. Pop, rock, funk, and hip hop all combine to comprise their sound, and while it's not a flawless mix, the band more than knows what they are doing. Every band member displays a new musical prowess for every track on Black & White, and it pays off. Having a strong vocalist doesn't hurt either; Tauren Wells's pipes adapt expertly to every song's style and feel tailor-made for their sound (pun unintended). They're charismatic, but they're never over-the-top or annoying, which can be a tricky balance with this sort of sound. The acoustic-based "Hold Me Together" is the best track on Black & White, sporting impressive harmonies in the process. Even though listeners can no doubt find this sound done better elsewhere, it's certainly one that's uncommon in the industry.

Lyrically, Royal Tailor has thoughtful things to say, but it has varying results. All sticking to a solid message, individual songs go all over the place, ranging from stressing the importance of missions ("Make A Move"), the irony of freedom while in Christ's sovereignty ("Gravity"), and analyzing relationships with spiritual and earthly things ("Hope"). On the other hand, some of the more meaningful tracks come off a tad misguided or goofy, unintentional or not. "Wannabe" conveys the significance of living by Jesus' standards, not the world's, but unfortunately tends to link all wealth to superficiality ("Gotta friend lives down the road/livin' life like a TV show/but his big ol' house is not a home/Gotta Benz, got friends but he's not sure/would they be there if he was poor"). It's nothing heretical, but it's a hasty generalization. "Control" discusses the emptiness of secular media, but uses a variety of cheap puns of pop singers to weaken the song ("In a bad romance, going gaga/you know we're gettin' played by the love game/And hypnotized by all the fame.../ You're hot or cold/no teenage dream could ever be worth your soul").

There's quite a bit of tightening up that Royal Tailor can do, but with an admirable mission at the core and a thought-through musical approach to accompany it, they're well on their way to great things ahead. There are still elements present that give the record a less-than-professional feel, but most of them are minor enough to still enjoy the album for what it is. Royal Tailor can rise to the occasion next time around to create something truly remarkable, but in the meantime, Black & White is evidence of enormous potential for the quartet.