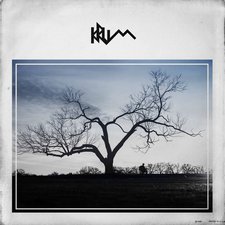 
Last year, in an effort to keep his momentum going with a late-in-the-game name change, veteran emcee Krum released a joint album with producer Rob Viktum called Bare Knuckle Gospel. It was a fantastic release that smacked us in the face with the message that, among other things, Krum is in it for the long haul. And now, of course, in true Krum style, he's already back at it with a brand new album, Blue-Eyed Devil. And for the first time since 2011's Hotdoggin', we're treated to what is officially a solo album.

Now, you might be saying, "Hey wait, he's released several solo albums since Hotdoggin'," and I get what you're saying. However, other people have had quite a hand in each album since; DJ Sean P, Rob Viktum, For Beat's Sake...they've all been major players in each release. Blue-Eyed Devil does feature a few other emcees and a handful of different producers providing the beats, but that's a standard hip hop album. Krum had total creative control over the direction of this album, and, as usual, it's not lacking in an overall theme. Interestingly, Krum is the titular character, if you will, as the album revolves around the idea that we can be our own worst enemies, or our own devils. The devil is surely "the enemy," but sometimes it's no more than our own flesh and selfish desires that cause us to stumble. Krum hits on this topic with grace and humility as only he can.

Blue-Eyed Devil is quite possibly Krum's most personal album to date. He's never been afraid to be an open book, but he gives us a deeper look into his life, with songs that touch on past relationships and personal shortcomings. "Forget Me Not" deals with life after divorce, and "On My Own" shows Krum's attempts at dating and making the decision to keep living single. He also drops a fantastic line in "Oddball" about his name-change ("I've only been served when it's cease and desist, for the name [censored], for the logo and fist"); being careful to not use his old name, he gives his fans a little insight. Ironically, this is also the track where he throws it back to an album under the old name, Don't Drink the Water, as he borrows the hook of one of his best songs "The Difference" ("They laugh at me 'cause I'm different, I laugh at them 'cause they're not, I got to follow something that's different, something most ain't got").

Though Krum is open about his struggles, Blue-Eyed Devil is not an album of defeat. Just the opposite, actually, as Krum proclaims the Lord's victory throughout, as well as offers sound wisdom on fighting temptation. Of course, there's the clip from Bishop TD Jakes that warns against spending time messing around with the world. Regardless of your thoughts on Jakes and his ministry, it is sound advice that believers would be wise to heed. Album highlight "Dougie With The Devil" is a fantastic track about shaking off the devil when you're dealing with temptation - an idea echoed in the title track a few tracks later. Nearly halfway through the album, we find Krum worshiping the Lord for His willingness to carry our load when it's too much for us. "Broken Vessles" is a beautiful call to "all you who labor and are heavy-laden" to "find your rest tonight." Krum ends the album with a proclamation that Satan's kingdom will not stand. Though the soundbite high-pitched choir singing and fired-up preacher are a little chilling at times, I absolutely love that we're left with an emphasis on the victory in Christ as He tears down the kingdom of the enemy rather than resolutionless problems and sin.

Musically, Krum has stated that this album is a combination of what fans have come to expect and where his creative vision is taking him. As with last year's Bare Knuckle Gospel (and even a little bit on 2011's Hotdoggin'), Blue-Eyed Devil is heavily influenced by blues, jazz, and gospel music. Of course, there is a lot of record-scratching and samples (like a terrific Manchild sample from last year's Move Merchants II), because what would a hip hop album be without those things? But you're also going to get songs like "Blue-Eyed Devil," which features a guitar riff reminiscent of The Black Keys, and "Forget Me Not," which seems to pull from some of the greats of blues, like B.B. King. Krum solo albums also tend to be a bit more musical than collaborative efforts; we typically find him doing a good deal of singing as well as rapping. On this album, the singing is mostly confined to hooks or bridges, but one of my favorite songs features an approximate 50:50 ratio of singing to rapping. I mentioned the song earlier, but "Broken Vessels" is a truly emotional worship song that's easy to sing along to and a great reminder of our own personal testimonies.

Year after year, as Krum releases album after album, he does so without ever seeming to disappoint. His quality is consistent, and his artistic vision is always translated so well, leaving the avid listener knowing his frame of mind when writing and recording. Blue-Eyed Devil is easily one of his best albums, and I've found myself listening to it at least once a day since it came out. This is an easy recommendation for hip hop fans, whether you've been a fan since day one, you're a new listener, or something in between. My personal highlights are "Dougie With The Devil," "Broken Vessels," "Oddball," and "On My Own." You don't even have to pay for it if you don't want to; just hit up his Bandcamp and give it a download. Either way, just add this to your collection.