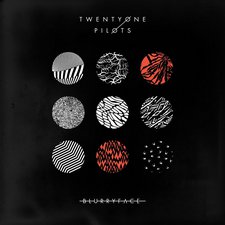 
Let me preface this by stating that Blurryface is likely the most complex album I've reviewed to date. In addition to the intricate lyrics and double (and triple) entendres that we've come to expect from Twenty One Pilots, the album doesn't truly stand alone. As the fourth studio album by the band, it continually references not only itself, but past material, often explaining the lyrical meanings via context from older songs.

Oh, and did I mention that Blurryface is a concept album? In truth, a case study would almost certainly yield results worthy of publishing in a journal of psychology. For fans of the band, this probably doesn't come as much of a surprise. Lead vocalist Tyler Joseph has always penned convoluted and honest lyrics, often dealing with his own internal struggles, both spiritual and psychological. Questions are asked, often in a blunt, deep, and witty fashion. This album, however, takes it to another level. The briefest possible summary is that "Blurryface" is Tyler's internal nemesis. Most of the album seems to be a conversation and battle between the two characters, with "Blurry" representing Tyler's doubts, insecurities, and demons as he is appealing to God for comfort and answers.

Rather predictably, Blurryface is anything but that. The band again refuses to be locked into a genre, with "experimental indie hipster hop" being the best offered guess. The album relies heavily on piano, ukulele, rap, and electronic elements with an occasional scream thrown in for good measure. Somewhat paradoxically, Blurryface carries itself with a chill attitude, all the while maintaining a heavy and foreboding atmosphere in the distance.

The album opens up swinging with "Heavydirtysoul," a piano-driven track which showcases the rap/pop talent of the band. The lyrics set the stage for the oncoming story: "this is not rap, this is not hip-hop / just another attempt to make the voices stop / can You save my heavy dirty soul?" The second track, "Stressed Out," carries the structural vibe found on Vessel and introduces the eponymous character of Blurryface.

The third track, "Ride," cultivates the relaxed mood, while the fourth, Blurryface's lead single, "Fairly Local," deepens the conflict between the story's characters. "Tear in My Heart" is a rather amusing and comical love song written to Tyler's wife ("I'm driving, here I sit / cursing my government / for not using my taxes to fill holes with more cement"). Tyler addresses his frustration with the music industry on "Lane Boy" when he states "there's a few songs on this record that feel common / I'm in constant confrontation with what I want and what is poppin' / in the industry it seems to me that singles on the radio are currency / my creativity's only free when I'm playing shows."

"The Judge" is arguably one of the best songs on the record. It does a good job of representing Twenty One Pilots' discography. This is the first track where the spiritual elements clearly come forward when Tyler sings "You're the judge, oh no / set me free / I know my soul's freezing / Hell's hot for good reason / so please, take me / I don't know if this song is a surrender or a revel / don't know if this one's about me or the devil." From this point forward, the album lyrically takes on a moodier substance.

Towards the end of the album lies a particularly touching track, "We Don't Believe What's on TV." The fast-paced tempo flows well with the silly and serious lines, "I don't care what's in your hair / I just wanna know what's on your mind / I used to say I wanna die before I'm old / but because of you I might think twice." The band dabbles a little more extensively with reggae on "Message Man" while "Not Today" represents Tyler growing closer to achieving his victory over Blurryface.

The closing track, "Goner," reveals just how long this project has been planned as a different version of this piece was released online back in 2012. The lyrics consist of Tyler honestly appealing to God: "Though I'm weak and beaten down / I'll slip away into this sound / the Ghost of You is close to me / I'm inside out/ You're underneath." The song also seems to tentatively conclude the struggle against Blurryface: "I've got two faces / Blurry's the one I'm not / I need Your help to take him out." Melodically, this is an incredible piece, perfectly accentuated with the screams and guitar riffs at its closing.

At the end of the day, Blurryface is as bizarre and outlandish as its fictional namesake. Much of its content can and will be interpreted in many different ways, with some of it initially appearing to be quite dark. While there exist a handful of catchy, radio-friendly tracks, Blurryface is not light material. Listeners will need to extensively chew over the deeper context to fully appreciate the message lurking below the surface. Art of this caliber seldom makes an appearance in the industry, and it would indeed be a travesty to set this album aside.