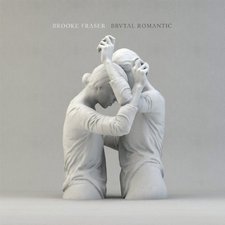 It has been 4 years since Brooke Fraser released her third album, Flags. Flags helped launch Fraser into an even broader audience, with her single "Something in the Water" being dubbed the Most Played New Zealand Song in the World for 2013-2014 by the APRA Silver Scroll Awards. Flags was received well by both critics and fans, and Fraser solidified her role as a folk-pop singer-songwriter. Or, so it would seem...

Over the past year, Fraser has given hints and glimpses of new music in the works, but fans did not hear her new sound until she debuted "Psychosocial" on Facebook via Soundcloud. The song was certainly different--never before has Fraser's voice been backed by tight, dark electronic beats and synths. The opening line, "I love your projection, but I don't love you" sets the tone for the song, which is a critique on the fickle and obsessive nature of people who use social media. In the second verse, though, we hear a piano emerge from the mix, reminding us that this is still the same Brooke Fraser.

"Psychosocial" is the lead track on Brutal Romantic, an album which is sinfully short at only 10 tracks long with a running time of 36 minutes and 58 seconds. In that short span of time, though, we hear some of Fraser's most unapologetic lyrics and a few of her finest musical moments. Fraser experiments with different sounds on Brutal Romantic, but the album remains cohesive. "Thunder" and "Kings and Queens" are both dance-floor worthy tracks. "Brutal Romance" tones down the electronic edge with the use of orchestral strings and a french horn. "New Histories" and "New Years Eve" have a wide, airy soundscape, where Fraser's voice is free to belt out high notes or whisper personal musings. We hear a distorted guitar usher us out of "Je Suis Pret," an anomaly in Brooke Fraser's catalogue of music.

Lyrically, Brutal Romantic contains some of the most challenging and encouraging lyrics for her listeners. It's this balance that warrants the album title "Brutal Romantic." "Psychosocial" and "Magical Machine" both provide thought-provoking observations about society's attachment to technology. "Thunder," "Start a War," and "Brutal Romance" testify to the power our words can have, echoing Proverbs 18:21. "Je Suis Pret" reminds us to be ready for when Christ returns: "See the tempest looking my way/Drain the skies of all their color...With a fire in my breast/Je suis pret/I am ready, I am ready." "Bloodrush" exhorts the listener to not wallow in sorrow, saying "Heed your own warning/Those tears in the night won't fall in the morning/You've got so much soul/You've got to get out and prove it to yourself!"

I thoroughly enjoyed Brutal Romantic and think it is a very brave and masterful effort from a well-regarded artist. However, the lyrics of "Magical Machine" are not quite on par with the rest of the album. This is a minor blip on the radar, though, and both fans and newcomers to Fraser's music will find plenty to enjoy on Brutal Romantic.