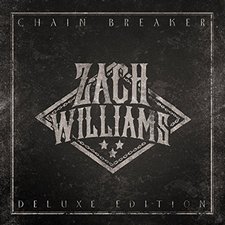 
Upon the release of Chain Breaker, with its title-track radio hit, Zach Williams was immediately cast in the role of Christian music's newest southern rocker. The album includes many gritty, soulful and gospel-y similarities to bands like Needtobreathe and Third Day. And just to add an exclamation point to these comparisons, the Deluxe Edition of Chain Breaker includes Williams' cover of the Allman Brothers' standard "Midnight Rider."

Those first wooed by the blue-eyed gospel stomp of "Chain Breaker" will experience comforting aural deja vu barely seconds into "Freedom," one of this reissue's bonus tracks. Its lyric is a power-soul paraphrase of the Apostle Paul's New Testament master/slave spiritual analogy, which finds Williams celebrating the believer's freedom from sin's cruel shackles. "Promised Land" carries much the same message as "Freedom," only this time Williams draws inspiration from the chosen people's Old Testament exodus out of Egypt. Whereas "Chain Breaker" is a praise song to our Heavenly Emancipator, "Promised Land" is a play-by-play telling of one man's freedom march.

Williams' music is staunchly gospel-centered, both musically and lyrically. The live recording of "Washed Clean," another added track, flows like a revival meeting altar call. Built upon midtempo acoustic guitar strumming, and colored by front porch harmonica, Williams inhabits a guilty, but repentant, soul in dire need of cleansing. Much like the Gospel itself, Williams' message is spiritually revolutionary, yet simple enough for a child to understand. There is a clear distinction between darkness and light, slavery and freedom, and Christ-centered metamorphosis is undeniable. He's not about to engage in heavy metaphoric language, along the lines of William Blake and C.S. Lewis, when the plain, clear truth will suffice.

However, what Williams may sacrifice in vocabulary, he more than makes up for with passionate singing. At its best, this album transports the listener to a Holy Spirit-driven church service where its emotional pull is irresistible. It's also churchy -- in the best possible sense -- in that there's never any doubt about who Williams is singing about. At a time when even many contemporary worship songs can easily be mistaken for romantic odes, Williams' music is one consistently holy communion.

One titled "Home" is not just an added track, but it also evidences Williams' stylistic reach. In contrast to the high energy displayed via "Chain Breaker," "Home" is far more meditative. It's an extended epiphany, where one individual comes to the realization that he/she has drifted too far from the shore, and needs to return to safety immediately. There are no sledgehammer-like handclaps and foot stomps driving Williams' lyrical points home. Momentum is, instead, built by surging acoustic guitar strums.

With his powerful gospel-centered lyrics and southern pop/rock sound that is both rugged and radio-friendly, it's easy to see why Zach Williams won two Dove awards and received a Grammy nod this year. Almost a year from the release of Chain Breaker, we now have a deluxe edition that adds an intro track, two new mid-tempo rockers, a cover of The Allman Brothers "Midnight Rider," and a live version of an older Zach Williams song, "Washed Clean." These deluxe tracks don't have the same level of memorability as the instant classic "Chain Breaker," or the catchy "Old Church Choir," but they do fit nicely with the freedom theme of Chain Breaker. If you have and enjoy the original album, definitely pick up the deluxe tracks, and if you are new to Zach Williams, this version is superior to the original 10-track album. - 11/1/17, Christopher Smith of Jesusfreakhideout.com

Buy It: AmazonMP3
* New tracks for this Deluxe Edition