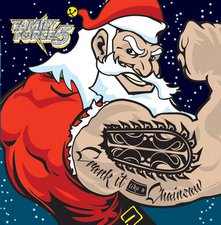 At first glance, this EP doesn't seem worth buying becuase it's only 2 songs and just a little over 6 minutes long, but any Family Force 5 wouldn't want to go without getting the Chainsaw EP.

Both songs were limited time free downloads from Soul Glow's radio show called PHENOMENON on NGEN Radio. The song "Phenomenon" has some great lyrics like "Hands up in the sky, don't care why. You feel like you could fly, we are phenomenon" and "I'll show you love if you show me love." However, it's not the kind of song you could play over and over because it can get annoying and it kind of reminds me of something you would hear on the Disney Channel after listening to it for a while.

All together, this is a fairly decent EP, however there's not many references to God, like their songs "Superhero" and "Not Alone." But like I said before, this would be a great addition to any FF5 fan's collection.

With Solomon "Soul Glow Activatur" Olds' new radio program on NGEN Radio has come two new Family Force 5 tunes - "Phenomenon" and "Crank It Like A Chainsaw." I first heard the former on NGEN's website as a free download to commemorate the release of the show, and the latter on their Christmas tour earlier this month. The title track is a really fun party jam that's about as silly and benign as "Ghostride the Whip" but even more catchy, while the dancy "Phenomenon" feels more like a b-side than a single. Still, both tracks are fun party tunes that forsake the edgier themes on III and feel more in line with what we'd expect from the Atlanta five. It's a bit silly to make the hard copy EP exclusive via a merch bundle on their website (a little trick learned from the Switchfoot gang perhaps?), but I wouldn't be surprised if these songs made their way to a wider-released EP in the near future... - 12/28/12, John DiBiase of Jesusfreakhideout.com