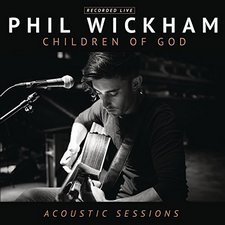 
When an artist sets out to make an acoustic album, it's a step of confidence--they believe they have material that deserves to be heard in a stripped-down setting. Shortly after releasing his latest LP, Children of God, worship artist Phil Wickham announced that he was going to release an acoustic project. Based on the previews Wickham released on social media and their fan reactions, Children of God Acoustic Sessions was set to be an impressive effort, and it mostly succeeds.

Instead of duplicating the track list verbatim from Children of God, Wickham plays with album structure on Acoustic Sessions, ordering the songs in a way that sounds cohesive for an acoustic presentation. As to be expected, the bulk of the album features acoustic versions of songs from Children of God, and most of these songs transition nicely to the acoustic sound. One of them is "The Secret Place," which provides a complementary backdrop for guest vocalist Madison Cunningham's beautifully delicate voice. "As It Is In Heaven" feels more intimate without the funky electronic components in the background, and while the original "Children of God" is a fun rally cry, the acoustic version sounds like soothing, musical chicken soup for the soul. In addition to the twelve Children of God tracks, Wickham also includes a medley of a few of his past songs, with the hymn "Nothing But the Blood," a cover of the Tim Hughes' song "Here With Me," and an original song (and album highlight) "At the Foot of the Cross."

For listeners, one thing to keep in mind is that the word "acoustic" can mean different things to different artists. For some, "acoustic" means any instrument that doesn't need to be plugged in can be used, while for others it simply means using only an acoustic guitar to accompany the vocals. Wickham falls into the latter category. While he certainly has the vocal prowess and guitar skills to shoulder an acoustic album on his own, Acoustic Sessions still feels like a bit of a missed opportunity. All the songs sound solid in acoustic form, but listening to song after song with the same voice and instrument can become a bit redundant for the casual listener. This project would have been enhanced by the inclusion of strings, piano, hand-claps or a box drum--any organic instrument which would have added more dynamic and elevated the emotion behind the songs.

Still, for the acoustic purist, there is little to complain about here. Wickham's sincerity is evident in his vocal delivery, and the lyrics are at the forefront with little going on in the background to distract the listener. This is a great album to listen to during personal worship time, and it almost sounds like Wickham is in the room worshipping with you. Indeed, those who have experienced Wickham's live acoustic performances will certainly appreciate the craftsmanship on Children of God Acoustic Sessions.