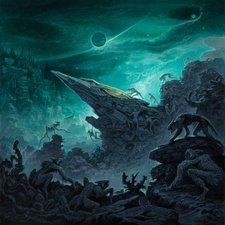 Becoming the Archetype
Children of the Great Extinction


Ten years ago, metal fans were given what some would consider a slightly disappointing final album from Becoming the Archetype. While I find it rather enjoyable, personally, I do understand the case that is to be made against the album. I Am featured a very different line-up, which came with a major change to the core songwriting, and it left most of the band's followers feeling a little underwhelmed. But let's put that behind us, because it's the future - anything can happen, including Jason Wisdom taking the helm once again, which is the case for BTA's comeback album, Children of the Great Extinction.

As you may or may not have guessed by the slightly apocalyptic title, this is indeed a full-on concept album. Like The Chronicles of Narnia or the various writings about Middle Earth, Children of the Great Extinction mirrors the Christian doctrines of creation, the fall, and redemption, but set in a fantasy world with a somewhat different lore. Now, it's only about 50 minutes long, so there's not as much world-building as the aforementioned classics, but the storytelling is straight-to-the-point and pretty easy to follow, with each trio of songs making up a different chapter of the story (as well as the closing track, which is its own chapter).

"The Dead World" begins with some deities, called the ancients, discovering a planet which was "nothing but a wasteland / a roiling sea, chaos and entropy / uninhabited, uninhabitable / no sign of life / a million miles away from home / no light to guide, transplanting the seeds of hope." The album echoes the consistent failures of the Israelites in "The Remnant," the coming of Christ in "The Calling," and salvation and the great commission in the epic closer, "The Sacrament" (as made evident by the shouts of "Go and reclaim the planet!"). The style of lyricism rides the line between fragmented death metal prose and fairytale novel, which works quite well, despite how that sounds. "The Ruins" makes for a great example, which describes the savior character on his quest to rescue some lost souls: "Apprehended by monstrous forms / skin like feathers caked in mud / nebulous speech, outstretched arms / protruding veins dripping blood / sail across the blackened sea / to the village of the living things / hollow eyes transfixed on me / the silence deafening / standing in the ruins, a world forsaken / the empty faces of hollow creatures / longing to awaken." BTA clearly wanted to make it both a narrative and a dang metal album and succeeded.

On that note, if you're not intending to dive into the lyrics and just want to enjoy some great metal music, then you're still in luck, because Children of the Great Extinction delivers in spades. It's classic BTA all the way through - fast and heavy at its core, slow and thoughtful when it needs to be, and even soft and gentle on occasion. "The Phantom Field" is the signature, pretty interlude that the band excels at. It feeds directly into "The Awakening," which opens with what I believe is a guzheng, and it sounds lovely. But then of course we have pummeling tracks like "The Lost Colony" and the Extol-esque "The Calling" that blend the best of metalcore, prog metal, symphonic metal, and death metal (and how good is that guitar solo in "The Calling," right?). It's the sort of thing that feels pretty foreign for modern-day Solid State Records, but it's certainly welcome.

The most cliche thing I could say is that these guys haven't lost a step. But cliche or not, it's the truth. Granted, the individual members haven't been absent from the music world (most notably, Wisdom's Death Therapy project), but it's still a highly impressive album for a trio of guys who haven't played together since 2011's Celestial Completion. There's always a bit of hopeful reservation when a beloved band reunites for new music, but thankfully, Children of the Great Extinction does not disappoint. And now that I'm finished doing a remarkably poor job of describing it, it's time to go and give it a listen and enjoy what is hopefully the beginning of another run for Becoming the Archetype.

Its a happy day for metal fans. After ten long years, progressive metal titans Becoming The Archetype are back, original lineup and all, and boy are they back with a vengeance. 2012s I Am, was a valiant effort to continue without frontman/vocalist/bassist Jason Wisdom, but it was never possible to match the watermark and character he brings. This reunion takes the platitude its like they never left and blows it to smithereens at the outset with vicious opener The Dead World," showcasing a hungry band that has never been satisfied with average. This full-fledged concept album acts as a savior in a year when extreme heavy music has been lacking. Not lost in the technical thrashing we know and love are the ethereal and immense choruses that are consistent throughout, a trait that had been sparse in the band's back catalogue. Formulating a world out of whole cloth is nothing new for the band, and this story brings a dark and chilling atmosphere not unlike 2007s The Physics of Fire. Each BTA album has a cohesive life all its own, and Children Of The Great Extinction is no different. Innovative time changes, polarizing dynamic surprises, and abnormal chord choices often leave you thinking, oh they went there, while their fantasy storytelling mixed with high theology lures you in to unlock the metaphors buried in each track. This story succeeds where many concept albums have lost their way, as each song has individually identifiable parts, such as the brutal welcome to the world of dead men section in The Curse, the galloping rhythm in The Remnant, and the industrially-backed guest appearance by Demon Hunters Ryan Clark in The Ruins. Epic closer The Sacrament leaves ample room to connect this fictional world to our faith, as Wisdom growls, "It was a strange and dreadful strife/The day that life and death contended/The victory remained with life/The reign of death was ended/The ancient writing plainly says/Death is swallowed up in death/Now its sting is lost forever. And thats the charm of this story, no unpronounceable names or places are invented, and it doesnt feel out there;" youre just dropped into the middle of a world that you dont know, yet seems familiar.

With Children Of The Great Extinction, the genius of Becoming The Archetype returns in spades, wildly exceeding all expectations, and I desperately hope this is the beginning of another long run for the boys. Listen intentionally, read along with the lyrics, get immersed in this world, and make relatable connections. A clear frontrunner for metal album of the year. - Review date: 8/25/22, Joel Zaloum of Jesusfreakhideout.com

Becoming the Archetype is back, baby! After the very good, but sort of strange, Celestial Completion and the alright, but not really BTA, I Am, it's good to have the real thing again with Children of the Great Extinction. Jason Wisdom, Duck, and Seth Hecox are finally back together after 11 years and it doesn't feel like they've missed a beat. This one is a great listen from front to back and really surpassed my expectations for a BTA comeback. It's a cool concept and story, but the album is very good on its own merit. This one has all of the charms and different musical paths that a BTA album should have: Wisdom is still a top tier screamer/growler, Hecox's guitar playing is as good as ever, and Duck's drums are fantastic. It's really everything one could want in a Becoming the Archetype album. - 9/9/22 Michael Weaver