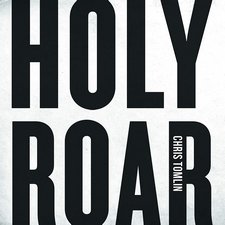 
Coming off his 2016 release, Never Lose Sight, worship artist Chris Tomlin is back with Holy Roar, a collection of 12 songs he has recorded over the past two years. Despite the success of his last release, Never Lose Sight seemed like a step backwards for Tomlin - the lyrics were cliche, and the musical compositions sounded bland and contrived. Unfortunately, Tomlin mainly sticks to the same formula this time around, with a few minor adjustments.

"Holy Roar" kicks the album off in typical Tomlin fashion: disappointingly cliche lyrics, and predictable chord progressions. Nothing new is said, and the bridge sounds like a rip-off of the bridge in Phil Wickham's hit, "This Is Amazing Grace." This just continues the trend of a lack of creativity within the worship genre, and it is seen consistently throughout this album. The next two tracks follow the same blueprint, and unfortunately create a relatively weak opening to the album. Thankfully, Tomlin redeems himself with the next few songs. Starting with bluesy-leaning "Goodness, Love, & Mercy," Tomlin wades into waters that he hasn't gone into before, and it works quite well. "Satisfied" finally brings an upbeat song into the mix, and it encourages Christians to find their satisfaction in Christ, not in the world. "Praise Him Forever" continues in the same vein, boasting a catchy guitar hook reminiscent of "Your Grace Is Enough." The album hits a climax in the track "Is He Worthy?", which is easily the strongest offering here. The problem that this song brings is that it is originally written by Andrew Peterson, not Tomlin. The lyrics are so good that the rest of the album pales in comparison from a lyrical standpoint. This is disappointing, considering the fact that Tomlin didn't write it.

As the album comes to a close, there is one song worth mentioning: the beautiful "I Stand In Awe." Featuring Nicole Serrano, this track is certainly a highlight, but it also has an issue. Nicole sings almost the entire song, which makes it feel a little out of place on a "Chris Tomlin" album. While it is one of the better tracks, it sounds like it should be on a different record.

Worship music in general is a tough genre to stand out in, as most of it sounds similar and generic. Unfortunately, Tomlin doesn't do anything to change that stereotype with his latest album. While Holy Roar has a few decent cuts on it, most of it ends up sounding like the same music Tomlin has already put out, and he doesn't bring anything new to the table. This is a shame, too, because he is a talented musician and songwriter - and he has shown the potential to be more than your average worship artist. That being said, songs like "Resurrection Power" and "Impact" leave the listener wanting more, and this album does not deliver on that. Overall, there's a good chance Tomlin fans will absolutely love this album, and a couple songs will be used in churches for a long time. However, myself and many others will be waiting for the day that Tomlin breaks the mold, and unleashes his full potential in an album.