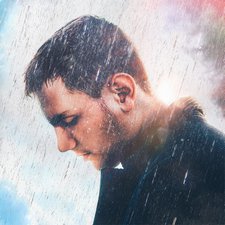 
One of the newer artists to sign with Reach Records, Hulvey, released 2 EPs in 2020 - Prelude and BRKHRT. Both were really good representations of his skill and passion. I could definitely hear some influence of Post Malone in both EPs, but his heart for the craft and, ultimately, for God made his music hard to ignore. I was excited to hear his debut album, Christopher. I have to be honest, though; I was a bit disappointed.

I'm not saying it's a bad album, but it wasn't what I was expecting. I was hoping to hear more of Hulvey's talent and originality on display. Instead, on most of the songs, he sounds more like the Christian Post Malone. I'm not trying to attack Hulvey as an artist at all; I believe that he has a great gift to offer. It's just not represented well in this collection of songs.

Most of the songs on this record aren't noteworthy. They are well-produced, but not memorable. The majority of this album was just average, which was quite a letdown. The only standout tracks on Christopher are "Nothing without Jesus" and "Washed in the Blood." Hulvey thrives when he is worshipping his Creator; his love for God is on full display on these tracks.

When it's all said and done, this is a pretty mediocre debut, coming from a talented artist. We will definitely be hearing more from Hulvey, though. Hopefully he will be able to truly shine on his future projects. I believe that with clearer direction and more creativity, we will see him at his fullest potential soon enough.