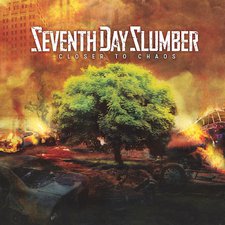 
When a band waters down their sound because of record label pressure, sometimes they never fully regain their true identity. Thankfully, this is not the case for Seventh Day Slumber, who has been steadily making a return to their rock roots since leaving BEC in 2013. In 2017, the band released Found, their first full-length album since leaving the label, and it showed a lot of promise for the future. Their latest endeavor, Closer To Chaos, released on their own Rockfest Records, completes this journey with what may be their heaviest project yet.

The record kicks off with Alive Again, a classic SDS rocker that will have listeners head-banging along in no time. Cold Kiss Embrace keeps things moving, as lead singer Joseph Rojas passionately sings about leaving a toxic relationship, No, I wont let you win / Im over your cold kiss embrace. Following this up is the heavy-hitter Burning An Empire, a song that tackles the subject of America throwing God out of the picture, in areas such as abortion: We are the ones who decide who lives and who dies / We let the unborn pay the price //  Were burning an empire / Can we arise from the ashes again? The momentum continues with the epic Drama and Light It Up, as both tracks feature some impressive guitar work from the bands guitarist, Jeremy Holderfield.

The album hits its peak with the monster numbers Man Down and The Letter. The former is a heartfelt song written in honor of those who suffer from PTSD, and is easily one of the strongest tracks SDS has ever penned, Man down, weve got a man down / Crying for help but I cant make a sound / Trapped inside my own mind / Im losing control of all my emotions / Is there a cure for the wounds that Ive opened?. Speaking out about the suicide epidemic, The Letter is an honest song written from the perspective of someone ready to take their own life, I think youd be better off if I wasnt here / Im writing you for the last time / Been hurting for years / Said the page stained with tears. As the record comes to an end, the worshipful Still Breathing and the transparent Sober are welcome additions, with the latter showing Rojas personal struggle of staying clean from his former lifestyle. Your Eyes serves as a solid closer as it deals with the issue of self worth, and wanting to see ourselves in the same light that God sees us.

While Seventh Day Slumber may not produce the most groundbreaking rock in the industry, they have successfully created an album with practically no major flaws. From the tight musicianship to the solid lyricism, to the passionate vocal delivery, there is not much to criticize about the bands latest release. This is easily some of their best work, which is impressive, considering the fact that they have been around for almost 20 years; it showcases why they deserve a place in the Christian Rock industry. For fans of the band, or rock in general, Closer To Chaos is a must-buy and comes highly recommended!