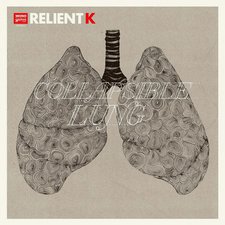 For any band that has any sort of commercial success, the constant challenge is to keep the music interesting for themselves. Fans will inevitably come and go, but especially for bands that last a long time, their members have to take a more adventurous route at least every once in a while to stay invested in the musical journey. One of the most beloved bands of a generation (debuting thirteen years ago this year), Relient K is no exception to this axiom, and an album like Collapsible Lung is proof. That being said, welcome to the most eccentric Relient K album yet.

Upon surveying the eleven tracks of Collapsible Lung, any fan is going to be taken aback by the album's most obvious trait: no one track is remotely similar to another. While this is at least partly due to the smattering of songwriters on the project (more on that in a bit), there's not too much here that a listener can link back to the band's previous work. Tracks like the utterly dance-able "Boomerang" and the synth-laden "If I Could Take You Home" showcase early on in the tracklisting that the band is throwing in everything but the kitchen sink for this effort. While there are some flickering moments of musical familiarity that keep the listener at home base--like "Don't Blink," "Disaster," the title track, and the entertaining bonus track "That's My Jam"--every song is a new twist or turn, and it takes quite a while to get used to this album's concept. Interestingly, however, there's not much of a cohesive concept to work with at all; Relient K hasn't made it much of a secret that they were going for an "unpredictable" album, and they certainly delivered on that promise. Granted, Relient K has never been a band to artistically paint themselves into a corner from album to album, but steadiness has always been key. It's the sort of issue that RK classics like Mmhmm and Forget and Not Slow Down never struggled with, giving the band's seventh studio album a less complete feel that's admittedly hard to shake off.

Besides the great disparity between each song on the record, the biggest difference on Collapsible Lung compared to previous Relient K releases is the songwriting. Eight of the eleven tracks here feature co-write credits from non-members of Relient K, including songwriters Ari Levine (Cee Lo Green, Bruno Mars), Fernando Garibay (Lady Gaga), and Evan Bogart (Beyonce, Rihanna). With this knowledge in mind, it makes the wide variety of the album make a whole lot more sense, even if it doesn't necessarily reconcile all of the tracks sounding great together. It also doesn't especially give the smattering of lyrical approaches much of a purposeful framework. From dysfunctional relationships ("Boomerang," "Gloria," "Disaster") to life regrets ("Lost Boy," "PTL") to reflections on happy times ("Don't Blink," "If I Could Take You Home," "When You Were My Baby"), the record jumps around sonically and in attitude with a less coherent pattern than a seasoned band should.

Some of the songwriting here is uncharacteristically weak in some parts, too; "Can't Complain," for example, is going for a carefree, reggae-influenced number that vouches for an anxiety-free outlook on life, but some lines suffer from a lack of sophistication ("Looking at the cop in the rearview mirror/probably should have stopped but the crosswalk was clear/I'll just imagine it's a ticket to a Broadway show") or even simple polish ("I know the cookie's gonna crumble/and I know life is gonna suck some days"). "Disaster" even features the surprisingly unsophisticated line "Baby, you look so sexy," that's just a little hard to take seriously. It's hard to say which lines came from Matt Thiessen and which ones came from another writer, but these bits of lyrics unfortunately drag the album down and maintain the nagging feeling that Relient K fans are accustomed to a higher quality. Though lines such as these pop up more than what would be expected, they are thankfully the exception and not the rule. "PTL" showcases the pitfalls of letting a good thing get away in a trademark Matt Thiessen fashion ("I never meant to be a part-time lover/then again I've never been a full-time man/guess I'm the fool that you think I am"), while "Gloria" is a tongue-in-cheek ode to a less-than-worthwhile lover ("I guess it's love when you tell me what to wear/I guess it's love when you're going through my phone"). These are the aspects of Relient K that haven't gone anywhere: songwriting that can be enjoyable, clever, and convicting, all at the same time.

At the very least, Collapsible Lung is a daring collection and will retain a sundry of reputations. Depending on who you ask, it could mean anything between a band taking the best creative risks of its career and a group of veterans throwing far too much caution to the wind for their own good. Regardless of the outlook, however, Relient K can't be accused of being stuck in a creative rut or making the same album twice, even if the finished product this time around isn't very consistent in its entirety compared to previous successes. But in the end, this is a Relient K that no listener has heard before, and Collapsible Lung is a welcomed experiment that keeps the band's fans on their toes, doing more right than wrong in the process.

It's been roughly four years since Forget and Not Slow Down released, and it left several roads open for Relient K to drive down. After a cover record and recent label and lineup adjustments, RK's future artistic route seemed unsure, and Collapsible Lung continues to solidify the confusion.

This is the first record that features co-writes outside of the band, and songs such as "Boomerang," "If I Could Take You Home," and "Can't Complain" exemplify some of the diversity (and deviance from previous work) on Collapsible Lung. Even though there are glimmers of Thiessen's signature wit (the title track, "That's My Jam"), the quality of lyrics has regressed quite a bit on this album. It's still catchy, but without a lot of the skill, finesse, and heart that trademarked their lyrics. Instrumentally, this album is all over the map. While artistic diversity is always appreciated, Collapsible Lung is almost too inconsistent, and at times it can feel more like a B-side album rather than a collective LP.

Collapsible Lung is essentially a fun pop album and is meant to leave the listener scratching their head by the end. It's a befuddling opus with enough cheekiness to keep things interesting. It's different, but it's probably not going to be remembered as their best work.

Even though this is a peppier outing than their previous release, Collapsible Lung seems to be lacking a lot of the delightful idiosyncratic and soulful nature that is sprinkled over almost everything that comes from Relient K. This release is average at best, but definitely not something you'd expect (or want) from a band like Relient K. - Cortney Warner, 7/1/13 End Second Opinion Box --->

Buy It: Zambooie.com (CD or Vinyl)