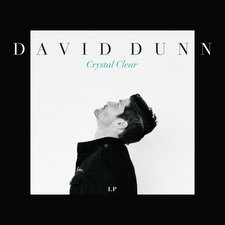 After releasing a preview EP last year, David Dunn has finally dropped his much anticipated full-length label debut, Crystal Clear. Encompassing a blend of pop, synth, and traditional worship elements, he delivers a project which fits exceptionally well into the established industry. In light of this, the album's greatest strength (its listenability) becomes its greatest weakness (its indistinguishability).

Dunn opens up with one of the album's strongest offerings, "It is Well." It carries a strong and catchy melody, and is a bit more original than some of the other pieces. Unfortunately, it is followed by "Have Everything," which is almost as generic of a song as can be found. Dunn does, however, deliver an impressive vocal performance.

"Today is Beautiful" follows suit with its predecessor, but things improve with "Nothing Left." The synthetic elements are well-delivered and lyrics find deeper footing than on prior tracks: "bruise my body with words / turn my love into hurt / I am defenseless / I'm gonna love you even when you hate me / 'till I'm crazy / till there's nothing left."

"Six (Waiting For Love)" is a great song, but the story elements are jam-packed with overtly-clichéd lyrics. While the song was clearly made to fit in with standard CCM radio, it goes a bit deeper and provides a powerful and worshipful message. On the latter half of the album lie a few gems, "No Matter What," "Clarity," and "Fade." The first one finds Dunn again in his best environment, echoing vocals and lyrics which feel reminiscent of Kevin Max.

While "Clarity" isn't the best track on Crystal Clear, it does a good job bridging the originality and marketability of Dunn's sound and style. The lyrics are also viable candidates for this category: "when what to do becomes a mystery / when confusion is the death of me, oh be my clarity / oh my God, can You show me who to be?" "Fade" closes out the album with a subtle, haunting piano/synth-driven melody. The lyrics are devout and the vocals passionate. It serves as an effective closing piece, but really echoes the truth that Dunn's talent should have made this a better album.

The two remix tracks ("Today is Beautiful" and "It is Well") seem to serve little purpose beyond stretching out the album. Neither piece offers anything vastly different from the originals, but adding synth to a synth-driven track was never going to create any real waves.

Ultimately, Dunn offers up a solid project with Crystal Clear, which holds its own against the industry standard. It fits in rather well with the likes of Mikeschair, Rush of Fools, and The Afters. Unfortunately, Crystal Clear doesn't tread any new ground and is left holding little more than a few good songs and a few dozen clichés. If David Dunn stops trying to fit in with the CCM, he'll become a force to be reckoned with. Hopefully his next album will extend his innate creativity and vision. The best tracks to check out are "It is Well," "No Matter What," and "Fade."