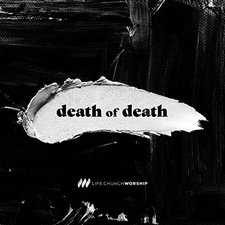 
The modern worship scene is overflowing with bands that continue to churn out the same music each year, even though most of it sounds recycled and overdone. While there are a few that seem to put some genuine effort into creating a unique worship experience for the listener (Rivers and Robots, for example), most groups end up falling by the wayside as "just another worship band" that show potential, but never do anything to break the mould. Unfortunately, the team at Life.Church Worship reinforces this stereotype with their latest EP, Death of Death.

The album kicks off with the EDM-influenced tune "All Glory." Both musically and lyrically speaking, it's exactly what you would expect from a band following in the footsteps of other mainstream worship groups. The song is filled with cookie-cutter synth pads that back uninspired and unoriginal lyrics, "All Glory to Your Name, Jesus / Your power ends our shame, Jesus / We lift our endless praise to the highest Name, Jesus." The next two tracks, "God So Good" and "Where The Spirit Of The Lord Is," follow in the same vein and end up being pretty forgettable. Thankfully, the title track fares a little better than its counterparts. While the topic has been covered before, the band succeeds in displaying God's victory over death in a relatively fresh light, "It was the death of death / When you rose to life / When the dark surrendered / To the risen light." However, the reprise offered afterward basically adds two unnecessary and very repetitive minutes; this addition should have been left off the EP, as the title track packs more of a punch without it.

For an artist to stand out in the worship genre, they must do something unique that sets them apart from the massive crowd that the genre is. If an artist continues to produce music similar to what has already been created, they will get lost within the crowd. Disappointingly, this is the case with the Life.Church Worship band; it's the same mediocre worship that we've been hearing constantly for a long time now, and it makes this reviewer ask the question: How many songs do we really need that rehash the same thing over and over again? While I am not in any way doubting the band's passion to praise God, the content within these songs comes across as bland and contrived; nothing new is being said that hasn't already been said hundreds of times by dozens of other artists. For fans of mainstream worship, you'll probably find a tune or two here to enjoy, but for the most part, this EP is not worth the time as there are stronger worship offerings elsewhere.