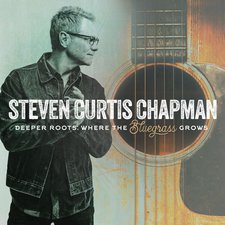 
Steven Curtis Chapman isnt looking to reinvent the wheel with Deeper Roots: Where the Bluegrass Grows. Rather, as the title suggests, it is an homage to the bluegrass history of Kentucky and the Chapman family  similar to the original, 2013 Cracker Barrel exclusive, Deep Roots. The presence of Ricky Skaggs on the album really cements it in true bluegrass form with one of the genre's biggest names. From front to back, the project is filled with reimagined covers of Chapman's previous work and classic hymns with only a couple original tracks.

What this outing lacks in groundbreaking innovation however, it makes up for by the comfort and joy provided to the listener in a sort of chicken soup for the soul style presentation of familiar melodies and themes. The few new additions that are offered flow well with the rest of the album both sonically and thematically. A listen all the way through provides a warm and safe experience  both a sense of familiarity for the listener, and creative safety.

It would have been nice to see more risks taken with the bluegrass renditions of the classic material, but those influences are so present in Chapmans work naturally that the majority of the album doesnt come across as very much of a stretch. No single part of the album stands out as poor, though, either. There are great tracks to be found here, such as the duet with Rascal Flatts Gary Levox, Til the Blue, but taken in full, the album isnt particularly noteworthy. While the choice to avoid any major risks feels intentional, it is at least a little bit disappointing.

Deeper Roots is a good album. There is plenty to like here if you have an affinity for Steven Curtis Chapman or this genre. Respect is given to every rendition of the historical tracks picked for the record, and it all comes together for a cohesive adventure. Dont expect any surprises or twists, but if you are looking for an easy listen that goes down smoothly, there is joy to be had Where the Bluegrass Grows.

Much like Steven Curtis Chapman's Cracker Barrel-exclusive project of six years ago, Deeper Roots mixes his past catalog with classic hymns along with his family, but he also is able to add a number of original songs to this project as well. One of those songs, the title track and arguably the best song included of these 13, is the bouncy lead-off track "Where The Bluegrass Grows," where Chapman sums up his musical journey to a tune backed with banjos and fiddles. The other track that has yet to be included on an SCC project (although it was released as a non-album charity single two years ago) is the Hurricane Harvey-inspired "Til' The Blue," in which he harnesses the talents of Rascal Flatts in another heart-touching song that Chapman does oh-so-well. In addition to those two songs, Chapman adds five new hymn recordings and a bluegrass version of his twenty-year-old mega-hit "Dive." Chapman's father Herb and brother Herb Jr. are featured prominently in this section and really shine whenever they appear, adding a great level of authenticity and originality.

It's not all new material here, however. In total, five songs out of 13 in this collection were also included on Deep Roots, four of which are unaltered from their original recording. While the reasoning for re-including them here makes sense, as they frankly aren't available anymore since Deep Roots is out of print, the duplicated tracks may feel a mite out of place to those who already owned the original (in particular for his father and brother's introductions on "Life Is Like A Mountain Railway," as they both had already been in two songs by the time it rolls around). The other semi-drawback here, unfortunately, is the bluegrass rendition of "Dive." While it's hard to fault the musical prowess displayed on this track (it does feature Ricky Skaggs, after all), the song itself just doesn't translate well for the frenetic pace and country twanging displayed.

With the mixture of old and new and all the features and familial ties, this is a perfect album for Chapman's longtime aficionados - but ironically, mainly the aficionados who don't already own this album's predecessor, Deep Roots. - Review date: 3/24/19, Mark Rice of Jesusfreakhideout.com

Steven Curtis Chapman's return to bluegrass with Deeper Roots shows audiences the genre in its finest form. The good mix of upbeat songs with contemplative tunes and a heaping helping of family and friends to aid in the process, speaks to the strengths of bluegrass. Some song choices seem like missteps (did we need another rendition of "I'll Fly Away"?) and some of the special versions of his previous songs don't translate well in this new mould, but overall, this is a solid effort that longtime fans of Chapman and the genre should enjoy. - 3/21/19 John Underdown