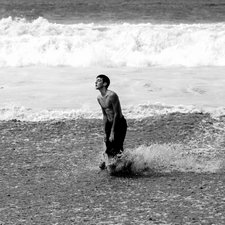 Like many great bands, Anberlin consciously tries new things to keep their concepts fresh and interesting. After New Surrender and Dark is the Way, Light is a Place showed Anberlin trying some new tricks with varying results, Vital proved to be the "sweet spot" for the band's ingenuity, carrying a daring mix of the old and new. Fittingly, the band then chose to expand Vital into a larger project called Devotion, which includes all the original tracks, plus six extra songs in the normal tracklisting and a live album to boot. Thankfully, it stands to confirm that Anberlin is still an exciting band to observe ten years after their debut.

With the description of "expanded edition" attached to the album, it would be easy to dismiss Devotion as Vital with just a few more tracks, but concluding this way would give less credit to the project than is due. Instead of tacking on the new tracks at the end like many re-releases tend to do, Anberlin cleverly mixes in these extra tracks in the normal tracklisting for a different experience altogether. At first, the album feels normal with "Self-Starter," "Little Tyrants," and "Other Side" in a row, but then the new track "City Electric" starts to play before "Someone Anyone," and it changes the dynamic just enough to keep the average fan surprised. Anyone already accustomed to Vital's order will get a little jolt with these new tracks interrupting Vital's normal flow, but these are welcomed changes that make the re-release a cut above the norm.

The six additional tracks each have their own appeal that makes Devotion a precarious release. The already-heard b-sides "Unstable," "Said Too Much," and "No Love to Speak" make generally good additions to Vital's concept, though it's the three all-new tracks that give Devotion a spark of variety. "City Electric" is a highly polished alt-rock track that complements Stephen Christian's soaring vocals for an anthemic feel. A tad reminiscent of the pop feel that New Surrender boasted, "City Electric" wouldn't have fit into the first edition of Vital well, but it's a distinctive inclusion here. "Dead American" majors on fast picking and a pounding chorus, but it may not be the best representation of Anberlin's strengths. While the screams are a different approach for the song, they seem a bit uncharacteristic of Christian because of their rarity. "ISFW" is by far the most different track of the new additions, majoring on electronic beats and voice distortions for a truly unique track in Anberlin's catalog. The song doesn't hurry itself very much, but it takes its time to provide extra serenity.

Also attached to Devotion is a live DVD entitled Live from the Music Hall of Williamsburg. Many fans remember Live from House of Blues Anaheim as a low-quality attempt to capture Anberlin's live show, featuring unbalanced mixing and a shoddy recording quality. Thankfully, however, Live from the Music Hall of Williamsburg corrects all of previous problems from before to generate highly listenable live versions of favorites from Anberlin's catalog. Recorded in Brooklyn, NY in between the releases of Dark is the Way, Light is a Place and Vital, it features a range of tracks from all across the band's career that make for a comprehensive and fulfilling experience; besides the b-side "I'd Like to Die" thrown in, every album in Anberlin's discography is represented by at least one track. Since the tour was acoustic-based, the thirteen tracks feature a lighter Anberlin than usual for a live setting, but it provides a distinctive air for the live album to follow, as well as a chance for some tracks to get some unusual, but accomplished, new treatments. While some tracks like "Inevitable," "Down," and "The Unwinding Cable Car" fit naturally into the set, others find a new level of excellence as a lighter approach, like the bass-coated "Alexithymia," the keyboard solo in "Dismantle.Repair.," the old-school "Naïve Orleans," and the infectiously upbeat "Impossible." Overall, Live from the Music Hall of Williamsburg is the live album Anberlin fans have yearned to hear, and it only adds to Devotion's value.

With so much material in one project, Devotion has a special ability to appeal to any Anberlin fan's experience. For those uninitiated to Vital, Devotion is by far the best option (and the Deluxe Edition adds a new remix album of songs featured on Vital), as it includes the most bang for the buck. But with an excellent live album and extra tracks accounted for, it's even worth double-dipping for the new material if one already has Vital in their library. Perhaps the greatest takeaway from Devotion, however, is that it sets a new precedent for other albums of its type, and Vital only benefits from the treatment. Devotion is a special edition done right, and Anberlin fans have plenty of reason to stay excited about the band's current direction.

Buy It: iTunes (All Audio)