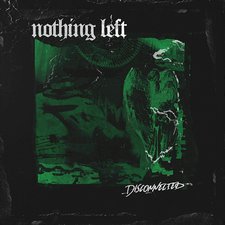 
As For Today was winding down its final tour in 2016, its two guitarists, Ryan and Brandon Leitru, began working on material for their new band, Nothing Left. A supergroup of sorts, as the band also features former members of Silent Planet and A Bullet For Pretty Boy, Nothing Left released a very promising, six-song EP three years ago, and then fell silent. But the band is back to continue building their legacy with their first full-length album, Disconnected.

The music of Disconnected is closer to traditional hardcore than most of Facedown's releases as of late. With the label releasing a lot more melodic music these days (even the harder ones), it was surprising to hear an album so uncompromisingly loud and heavy. But that's what Nothing Left did on their debut and they haven't slowed down one bit. Disconnected is a kind of album that may take a listen or two before one begins to really appreciate it, though - if at all. My first listen left little impression on me, as it just seemingly came and went and that was that. With further listens, I'm more appreciative of the songs individually, such as "Beneath the Surface," a fast, gritty song that is a great example of the best of Nothing Left. But as a whole, each song almost begins to feel like more of the same. The songs are well-written, well-produced, etc, but it's hard to tell them apart. By the time the end rolls around, even after multiple listens, I still feel the "came and went and that was that" sentiment, with little desire to revisit it after it's over.

As I said, Destroy and Rebuild was a promising introduction to Nothing Left. Disconnected definitely feels like the proper follow-up, building off of what the band had established and delivering more of what supporters were looking for. But when it's all said and done, it didn't really capture me. But despite not being quite as memorable for me, it's still a pretty solid album, and fans of any of the related bands, and Facedown Records, should absolutely give it a listen and/or purchase.