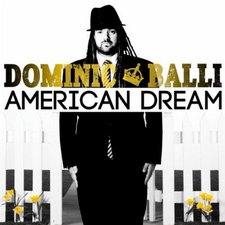 Dominic Balli's sound can best be described as a mash-up of hip hop and reggae, with a healthy dose of gospel thrown in for good measure. Consequently, the tracks on American Dream cover a wide range of styles and personalities. The sound itself is fairly unique for the Christian world, but Balli also combines it with a lyrical sincerity and clear songwriting talent that is truly remarkable. The result is an album that skillfully covers a wide range of influences, and does so without feeling forced or cheesy.

The title track gets things going energetically, thanks especially to some skillful guest rapping by Sonny Sandoval of P.O.D. "We Won't Stop" follows, and is sonically the most gospel-heavy song on the album, even including a nice little electric organ solo and a jumpy horn section. "Louder" is the definite upbeat highlight of the album, with a sound approaching closer to typical radio pop music, but still maintaining a distinct reggae vibe. Other highlights include "Favela," the truest reggae track on the album, and the lively "All We Need is Love," which was originally released on Public Announcement. However, referring to any song on this album as a highlight is merely to say that it's even better than the rest of the album, because with the possible exception of "See What We've Become," there are essentially no weak tracks on this album.

Balli's lyrics also deserve specific praise. The title track speaks profoundly towards hiding personal greed under the guise of the classic American dream. "Louder" has a simple message of the importance of kind words, as Balli says "A bitter tongue is a bullet slung, it can shoot some people down. But a gentle word, while it's seldom heard, can wipe away a frown." "You Are There" is a somewhat lighthearted track about trusting in God through life's difficulties, while "Daisy's Song" is a very worshipful tune about the love of Christ. Other tracks deal with issues such as spiritual warfare, personal loss, and even romance.

American Dream is unquestionably one of the best albums released so far in 2011, and one that will come as an unexpected surprise to many listeners. It is stylistically unique in the realm of Christian music, and performed with almost flawless execution. The songwriting is both excellent and diverse, and the message is spiritually significant. In a musical scene that is often overwhelmed by generic sameness, Dominic Balli is definitely a welcome relief.

Dominic Balli first tickled my ears with his song "Remedy," which perfectly blended some smooth reggae with redemptive lyrics and a skillfully-performed hip hop flow in the bridge. With new distribution through Infinity comes his sophomore album, American Dream. "All We Need Is Love" is a vaguely reggae track, but it's mostly a made-for-radio kind of song. It's a good song with a feel-good vibe, and a pretty catchy hook that gives it replayability. "Louder" is a very similar track; not identical, but the overall construction of the song is very similar (pop-reggae verses with a very poppy, acoustic hook). Balli has a few different sounds throughout this album; mostly reggae, if not reggae-based, but there's also the radio pop stuff here and there as well as a Jack Johnson-esque sound. The title track starts things off with an urban flair, and includes a guest appearance from P.O.D.'s Sonny Sandoval. Sandoval surprised listeners when he made an appearance in a Lecrae track last year, and he continues to surprise (and entertain) in this guest appearance as well. I love his line that says "They say cash rules everything around me, it seems for thirty pieces you can buy you a King." A lot of American Dream is on par with such reggae legends as Bob and Ziggy Marley, albeit with better production and sound on Balli's part. The only real downfall is that reggae is a hard genre to make into something amazing. It's not really Balli's fault, it's just that there's not much you can do with reggae. Balli did a good job with the genre though, and I do recommend American Dream for fans of Jack Johnson, Paul Wright, Matisyahu and reggae in general. - Scott Fryberger, 7/11/11