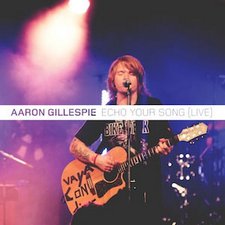 Singer songwriter Aaron Gillespie made his solo debut early on in 2011 with his BEC Recordings worship album, Anthem Song. It was quite a departure from both projects he's famously-known for, Underoath and The Almost, as the album was full of contemporary worship tunes. Approximately a year later, he's back with a few cover songs and a few from Anthem Song in live format for his first live EP, Echo Your Song.

The opening track is "Beautiful Exchange," originally written by Hillsong. Gillespie (accompanied by a backing band) only sings the chorus a few times, then we hear Gillespie urging the crowd to get into the worship. Gillespie's own song "We Were Made For You" is next, as it picks up the pace a little bit. Listening to this song in a live setting, it's easy to notice that this was a song that was made for a live setting, especially the chorus. Its "singability" factor is incredibly high, while the lyrics are worshipful, but easy. The Hillsong United-esque (but Gillespie penned) "Anthem Song" follows, which maintains the faster pace, but it's slowed down for the hymn "Jesus Paid It All." It's a beautiful piece which Gillespie and band perform with a sort of corporate worship-style musical backdrop. Another Hillsong tune comes next, called "Came To My Rescue." It makes for some of the slowest moments on Echo Your Song (and I'm sure some of the more intimate, if we were actually present in the audience). The bad part is that it's one of the songs that you know is Hillsong without even having to look it up, because the way the lyrics are written (and some of the lyrics themselves) are a dead giveaway. The EP closes with a medley of sorts; the track starts with Gillespie's song "I Will Worship You," one of the highlights of Anthem Song. It sounds great in its live rendition, and would probably have been a highlight for me if I was in attendance. The track fades out with a chorus of softly-sung hallelujah's, and ends abruptly after hearing Gillespie say "Give the Lord a shout of praise." It seems a little odd to cut out immediately after saying that.

Contemporary worship songs are made for churches and Christian events where followers can come together and worship the Lord. In that sense, it becomes less about the quality of the songwriting and more about the attendees having an experience with God. When any aspects of it are taken and put onto a disc and sold to people, artistry comes back into play, because now there's a fee involved. I've been in the audience during Gillespie's worship leading, and met with God and had a wonderful encounter. But the music itself is what has to be reviewed here, and it's just not fulfilling as a music fan. If you get a chance to catch an Aaron Gillespie "solo" show, make sure to do it. But I wouldn't recommend buying an album if you are only looking for some good music.