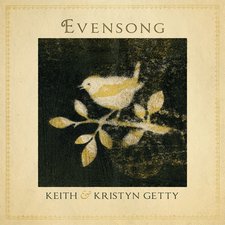 
The ancient tradition of the hymn-sing has become somewhat of a lost art in today's busy world. With Evensong, Ireland's storied hymnodists Keith & Kristyn Getty seek to resurrect this tradition with an emphasis on, as they put it, "sanctifying the night." The idea is to set aside time as a family to sing and instill biblical truths, before the looming darkness of the night creeps in. The pervasive theme of the album is comfort in God for the uncertain night, and in that regard, Evensong delivers on just about every level. These songs are largely percussion-less and sparsely constructed, leaving the stunning vocals of Kristyn to take center stage. Her voice is the driving force of any Getty album, and it frequently brings me to tears - though it's hard to explain why. If pressed, I'd say her voice exudes a haunting peace, exactly what this album is seeking to portray. Her voice, coupled with the biblical emphasis the Getty's are known for, make Evensong a major success.

The mesmerizing "Hush-A-By" begins the album, its mysterious melody encourages mind-wandering into the adventurous night, while providing comfort that... "the Lord surely keeps mother and child in His arms." Catchy melodies are in abundance, with the sparkling "Consider the Stars" atop the field. Its bobbing-and-weaving melody will linger in your head for days, or at least it did mine. Also noteworthy is the Paris-influenced "Lily of The Valley," complete with French lyrics and accordion, again invoking dreamlike thoughts. Andrew Peterson's "Is He Worthy" is a welcome addition to this contemplative vibe, noting the song's overarching theme and easy call-and-response for children.

There's a certain aura of holiness here, most notably in "The Lord Is In His Holy Temple," such that God's omnipresence is felt and you're left comforted that something greater than us is ruling above. These themes are suitably applied to any age, though children are certainly at the forefront. Back to the star of the show, Kristyn's vocal performance is something to behold. Take the smooth jazz remake of the classic hymn "His Eye Is On The Sparrow," that's tinged with gospel soul thanks to guest vocalist Heather Headley. This duet is simply magical, and limited instrumentation allows for each vocalist to shine in their respective skill sets, bringing to mind other iconic female duets like Carey and Houston; it's that good. The closing title track bookends the album with mysterious melodies, and gently whirl the mind into blissful rest, "by thy grace to rise again."

With Evensong, the Getty's have created a stunning album of spiritually enriching lullabies and hymns. I can imagine families singing these twilight tunes around the fireplace, trading nighttime jitters for a sense of Godly awe. It must be a blessing for the Getty's to be able to write and arrange these songs for their children, and families would be wise to heed their nocturnal version of the traditional hymn-sing.