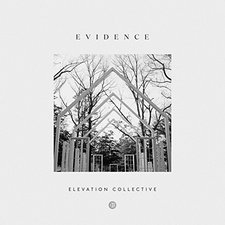 
If you're interested in Elevation Worship, or if you're at least a fan of the eight popular Elevation Worship songs being reimagined here, then you should not hesitate to pick up this album. However, if you're looking into Evidence, the first album from Elevation Collective, because you're a fan of gospel music or interested by the involvement of singers like Israel Houghton and Tasha Cobbs Leonard, you will most likely find this to be a satisfying, if not intermittently disappointing, collection.

The most notable aspect of Elevation Collective's first outing is its singers, and each of them gets to show off his or her vocal prowess, especially Sherretta Ivey's powerhouse high notes on "Here in the Presence" and Cobbs Leonard, who slays on Evidence's opening track, "Here as in Heaven." What ultimately holds these songs back is not the performances or the presentation, but the fact that none of them were originally written to be gospel songs, placing these artists in a position of reinterpreting the songs with similar-sounding gospel tropes.

"Do It Again" (feat. Travis Greene and Kierra Sheard) is where the struggle is most apparent, with the most iconic aspects of the original suppressing just how much "gospel" can be placed on its skeleton. Almost as an effort to overcompensate, the bridge has two in-your-face key changes, neither of which quite work. The track continues on for an unforgivable ten minutes, yet ironically, it finally becomes a gospel song at the eight-minute mark, and those final two minutes are a blast of ad-libbed vocals ("You may not come when I want you / But you're right on time"), pulsating rhythms, massive choirs, and funky bass lines.

Actually, across the board, these songs are most worth your time during their endings. This is both a good and bad thing. The third track, "Unstoppable God" (feat. Tye Tribbett), is a misfire until its final 90 seconds, when the song trades in an ill-fitting, trap-laden islander chorus for a heavy-hitting bridge of thick bass synths alongside a choir singing dark, ominous harmonies in call-and-response with Tribbett. Many of these songs follow the traditional pattern of going big (like, BIG!) during the bridge, and this structural format grows tiring by the album's close.

Not every song is a mixed bag, though; "O Come to the Altar" (feat. Chris Brown and Israel Houghton) is absolutely lovely from start to finish, displaying a more subtle and restrained form of the gospel genre. Two of the most winning tracks come at the very end, both of which are helmed by The Walls Group; "Resurrecting" and "Raised to Life" tie together like one extended piece, and the latter part, at a mere two minutes ten seconds, could've been much longer. It's a fitting place to end, leaving listeners wanting more. Here's hoping that Elevation Collective returns again soon, with all these talented artists and more, to record not only new versions of old Elevation songs, but to collaborate on some gospel originals, too.