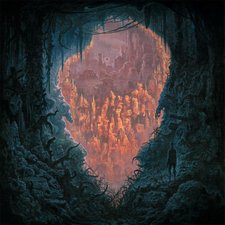 
When we last heard from Demon Hunter, they were acoustically remaking classics from their backlog on Songs of Death and Resurrection, and while that recording was in general a success, its subdued-by-design nature left me yearning for a return to form from these veteran metallers. Sensing a lighter side slowly taking over throughout their last few albums has had me slowly losing interest in a band that's been a source of solid heavy music for the entirety of my adult life. I enjoyed both of 2019's yin/yang albums War and Peace for different reasons. War was a statement that the band can still write engaging metal, which coincidently allowed Peace to fully explore the experimental, dark-rock vision of frontman Ryan Clark. I was expecting the next full-length album to feature both sides equally, but with Exile, the band's 12th studio album and first outside the Solid State record label, it's clear that Peace won the day. Sure the band still has a heavy streak as seen in the furious opener, "Defense Mechanism," and album highlight "Devotion," but these are few and far between. The skin and bones of Exile is brooding, dark, melodic alternative rock, with Ryan Clark's mid-range clean vocals taking center stage.

Expectations are a powerful thing, and after the aforementioned opener, I was expecting the typical dynamic polarity that we've come to expect from a DH album. Unexpectedly, I was met with the entire first half bearing a slow tempo and a more reserved feel. In fact, it's not until the sixth track, "Freedom Is Dead," that we are fully reintroduced to Clark's iconic growled vocal delivery, done in this quick burst of energy akin to the opener, making these more like metal appetizers than the main course. In subsequent listens, and after my expectations reset, Exile made more sense, and the intentionally solitary atmosphere it aims to convey does come through. It's technically a concept album, set in a dystopian world run by technological tyrants, where any disagreement is met by imprisonment or death. I've only done a cursory glance into the lore, but the connecting comic book series looks intriguing, and this world seems a perfect setting for Clark's stalwart, yet abstract, lyrical bent.

Though I can't fully judge the story-side of things, from a musical stand point, everything is far too simple. The guitar riffs are mostly bland and uninspiring (even on the heavier tracks), staying on one note far too long (listen to the main riff in "Chemicals" for example). Another issue I find is that the songs with longer runtimes stay within the same vein throughout (especially the wholly underwhelming closer, "Along The Way"), often repeating choruses or adding verses, when the extra length could have been better served by adding a frantic bridge, or call-and-response between Clark's distinct vocal styles. While the instrumental side of the band has never been the most technical, this is the first DH album where I found myself losing interest in the music, as it seems the storyline takes precedent over proficient compositions.

That's not to say the album is without merit or standout tracks. "Another Place" is one of the highlights of the first half; it boasts a unique ethereal sound, especially in the intro and verse, and has one of the best choruses on the entire album. The lyrics are also excellent, speaking of escape from evil warmongers into a hidden place of light... "If we're not allowed to be/breathe outside the lines/we will find our place/just beyond their eyes/somewhere of our own/somewhere through the black/set the old ablaze/never turning back." "Praise The Void," in which we were first introduced to a piano/string accompaniment in "Songs of Death and Resurrection," is now given the full power ballad treatment, and is a good song in either form... "But here in the dark I feel nothing I see no one/no solace at all/we once heard the lasting call/but now we praise the void/for this love, wasted love/praise the void/we found nothing is enough." The second leg of the album begins with a solid entry in "Revolutions," using a wide variety of vocal delivery and ranges, and I especially like how the pre-chorus section is spoken (well, screamed) from the perspective of the tempting antagonist, while the chorus is softly sung by the resisting rebel. "Godless" features an extended guitar section by Richie Faulkner of Judas Priest (an interesting choice to be sure), which lifts this otherwise average track. Lastly, "Devotion" brings just about everything you could want from a DH song, a gnarly opening riff, a groovy breakdown, guttural vocals in the verses, and a sing-along chorus.

Any entity that has a history and track record as long and celebrated as Demon Hunter is expected to consistently hit a certain bar of excellence, all the while maturing and staying within the box they've made for themselves. While I don't think Exile quite reaches that bar, I appreciate the lengths Clark went to in creating a not-too-distant-future fantasy story, defining its atmosphere through his music, while still embracing the hopefully defiant messages he's known for. While it's clear this Demon Hunter is a very different beast than the one churning out alt-metal platters in the mid-2000's, if you go into it with measured expectations, and especially if you prefer the less heavy side of the band, Exile is worth a shot.