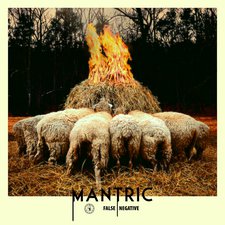 
The family tree descending from Extol reaches deep into both the Christian and secular sides of the heavy music world. While arguably being the greatest Christian death metal band of all time (due respect to Mortification), various current and former members of Extol have taken advantage of the band's on-again off-again career to branch out into other projects, with Fleshkiller and Azusa being the most notable in recent memory. Which brings us to Mantric, a band composed entirely of former Extol members, albeit most of them were only with Extol for a handful of years.

Mantric fall pretty squarely on the border of progressive rock and progressive metal, but there's no question that the more metallic side of that border is where they excel. Tracks like "Every Day is Independence Day" and "Darling Demon" are full-tilt bangers with aggression to spare and some really excellent harsh vocal performances. Unfortunately, the more rock-oriented portion of the album doesn't hold up as well. "Polyana" is a good start with its driving rhythms and swelling keys, but it becomes clear pretty quickly that Mantric's sense of melody is where the album falls down. "Itching Soul" has a serviceable chorus, but the verses are poorly fleshed-out. Meanwhile, "Norwegian Dastard" is a meandering softer track that never really goes anywhere.

On the other hand, "The Towering Mountain" really lives up to its title, and is arguably the best track on the album. It has just about everything you would want from a progressive metal song, and the closing couple minutes are jaw-dropping. The band also demonstrates an excellent level of technicality, much as would be expected from a progressive act. It's a shame, however, that many of the other songs here don't seem interested in displaying a similar degree of technical proficiency. There are other highlights here, with "Queen Fatigue" being especially fun, and the aggressive ramp-up on "Dawn" compensating nicely for the weakest part of the album after the sequence of the aforementioned "Norwegian Dastard" and the fairly awkward "Blame the Beggar."

False Negative is ultimately a bit of a mixed bag. The best moments are truly phenomenal, but a mushy middle and some misguided attempts at softer/more poppy tracks bring the album down slightly. With more aggression and some stronger melodies on the lighter songs, Mantric could make something really special. Nevertheless, if you're a fan of progressive rock and metal, False Negative is still absolutely worth a listen.